Kenneth Taylor was the Signals Officer in the 6th Battalion of Green Howards, in the Allied Expeditionary Force which landed in Normandy in northern France on D-Day, June 6, 1944. The Battalion was in the initial early-morning assault on Gold Beach. He kept a (more or less) daily diary of his experiences as his unit advanced north-eastwards across France, through Belgium, and eventually reached Nijmegen in Holland on 24 September. The diary continues until 11 December, 1944. A copy was given to the Green Howards Regimental Museum in Richmond, Yorkshire. See also War Diary, 1944 » 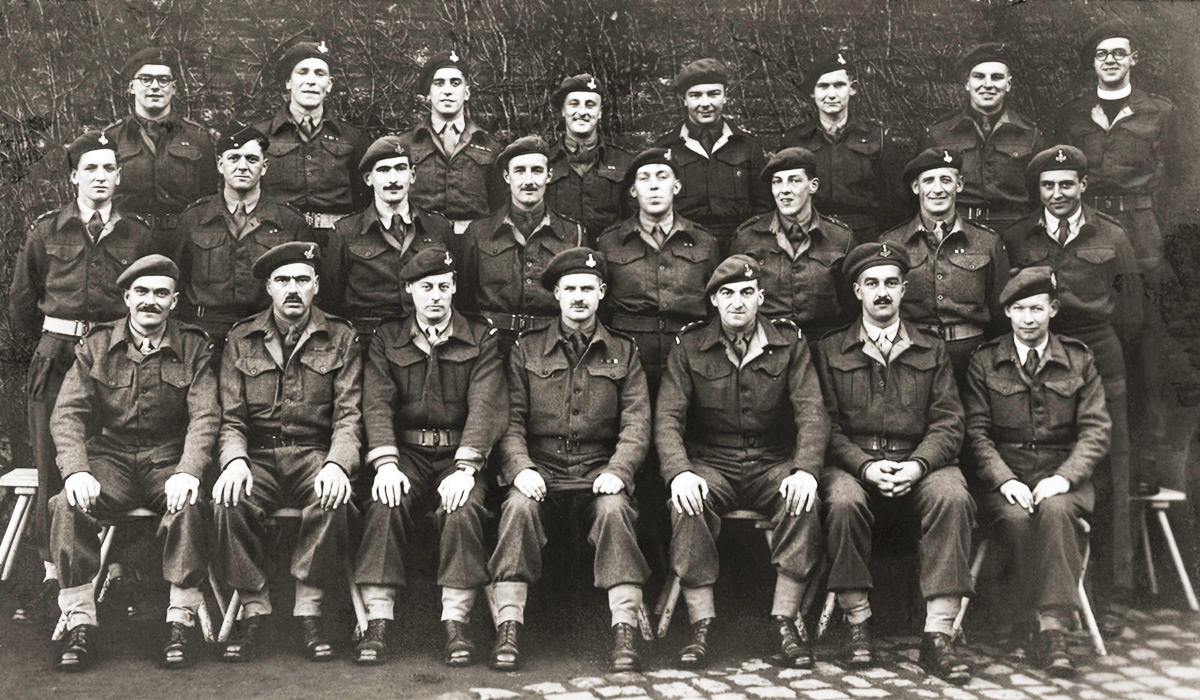 Officers of the 6th Battalion of Green Howards, December 4th, 1944

Thanks to Jeremy Prescott for giving me the names above. His father was the Padre, Malcolm Prescott.

Awakened early in the darkness. Ship rolling considerably but not feeling sick yet. Went on deck into the cold air to watch the glow over the French coast where the RAF is busy. Over on the right the sky is alight with flares, probably on the American sector. Wondering when I will first hear the enemy shells coming over. Had a very good breakfast despite the rough sea - probably the last for a long time. Got dressed up and went to action deck about 0430hrs. Everyone in high spirits and singing to the mouth organ. Whisky and rum being passed round freely. After a long time went up and embarked into LCM about 0530.

Quite light now and French coast can be seen dimly. Surrounded by ships but everything going on without interference. Had great difficulty in casting off owing to rough sea. Circled round for about half an hour and then made for coast about 7 miles away. Aircraft could be heard roaring overhead. Sea very unpleasant but most people too excited to be seasick. Had to tow one LCA some of the way but the rope kept snapping so left it. RAF and Navy making enormous noise and SP artillery putting over terrific barrage.

Eventually approached beach and found things difficult. Kept grounding and hitting obstacles with shells falling in water. Made a few attempts to get close in but failed. Eventually decided to climb out but the ramp refused to go down at first. Shrapnel hitting craft so we jumped for it at 0800hrs and water only up to waist. 27 set got wet thro' and would not work. Cairns hit in leg. Stopped a few minutes at edge of beach. Woods hit in eye. Got on to coast road where things were unpleasant owing to mortars and shells flying around and minefield on both sides. Some logs on the side of the road provided welcome protection.

Glad to find myself not unduly worried and able to walk around and see how people were getting on. Most of them OK but a few rather shaken. Quite a number of prisoners coming in looking completely dazed. "Achtung Minen" notices on roadside stick in my mind. Very glad to move up road away from the beach where things a little quieter. Grass on fire provided a useful smoke screen. Moved thro' Ver sur Mer and was "Spandau'ed" a little. Talked to a few prisoners including Russians. Held up at Crepon by 88s and Spandaus but by-passed them and stopped for a brew-up. On moving forward shelled and mortared and made one hasty exit from M14. Rainford killed. Dug in then moved fwd to overlook St Gabriel and dug in again. Drinking Champagne when disturbed again by Jerry. At about 2000hrs saw 4 of our tanks blazing. Put in final attack S of St Gabriel and stopped in wood at dark. Gibson wounded. We are the furthest forward troops of the whole invasion and fairly near our objective. The morale was very high and we have moved very quickly, by-passing any opposition where possible.

Stand to 0415. Moved off early towards St Leger, had a little fighting. Shot up once by Thunderbolts and 2 of our carriers knocked out. Went right past objective to Ducy - St Marguerite, but had to withdraw into line between St Leger and Cancaguy. Set up Bn HQ in pleasant orchard. First chance for a proper wash and sleep. No one eager to dig at first but some Spandau and mortar fire soon encouraged them. Terrific FLAK from beach at night. Wright wounded. We cannot move forward as there is nothing behind us to support. All the landings have been held up owing to filthy weather, so it is a case of hanging on. God knows what would have happened if there had been a heavy counter-attack last night.

Everyone well dug in now and beginning to feel tired. Not much sleep last night. Waiting for 7[th] Arm'd Div to land and come thro' us. Spent pleasant evening in Cancaguy talking to the inhabitants. Obtained good number of eggs and some chocolate. These French people very glad to see us. Dislike Jerries very much.

Nothing very fresh. Little sight of enemy except for a few snipers in front. Visited fwd joint post near Conde where they are bothered with Jerry fighting patrols at night. Marauder came down in next field. Saw about 6 Jerry planes making for beach. Eggs plentiful and food good. Pleasant people near Conde - house full of refugees - everyone well fed although short of sugar, soap, bread, etc. Went to Carrier fwd patrol and received a spot of shelling. Raining.

Feeling very tired, so had morning sleep. Visited Chateau which had been Jerry HQ. Found a few bottles of wine and some eggs. The sight of two charred German bodies on the roadside makes a very unpleasant impression.

Lovely day. Decided at midday to put in attack on Christot. Rather hurriedly arranged. Moved forward about 2 miles without opposition. Leading Coys then pinned down by Spandau. Reserve Coys likewise unable to advance. Went forward to try and get communications working. Very unpleasant. Heavy mortaring, shelling, and Spandau fire. Went in a Jeep to look for some casualties. Found none but got lost and was pinned by Spandau behind low bank. Spent about 20 minutes looking in hedges and buildings and expected to stumble on to a nest of Jerries at any moment. These Germans do not seem to take much notice of Red Cross and they Spandau'ed my Jeep the whole way back, but fortunately we moved too quickly to be hit.

All the Companies badly hit and many said it was the bloodiest battle they ever remembered. I soon got used to Spandau bullets flying overhead. Bn decided to withdraw as our flanks were unsecure and we were still suffering heavy casualties. Withdrew in good order to the accompaniment of renewed enemy machine gunning. 4 officers killed, 2 wounded, and about 60 men lost. Reorganised at last light but could not get any food up. Counter-attack expected. Tried to sleep in a ditch but too cold. I don't think any action will upset me after this one.

C.O. sent out a special message of praise for the way the battalion had fought. Withdrew to better positions at first light. Moved back across railway to Ducy. Saw a number of Shermans knocked out and on seeing a number of charred bodies beside them I wondered if perhaps the Infantry was not a worse life than the RAC after all. Back in a wood all very serene and peaceful. Enemy quite near but no sign of him. They had even worse casualties yesterday than we did.

Asked C.O. for transfer to Rifle Company but he refused. Feeling rather fed up with my job when the fighting is going on. Saw 3 French girls who gave information of 25 Canadian prisoners being shot at Audrieu. They are SS troops in front of us and are quite fanatical and very young. The prisoners are very haughty, although some of them had been told that we would shoot them when they were taken prisoner. Very tired and not much sleep at night owing to false alarm being given and most of the night stand-to.

Feeling extremely well. There seems to be plenty of buckshee Compo at present and with enormous numbers of eggs produced by Robertson we feed very well indeed. 49 Div arrived to relieve us in the afternoon, fresh from England and first time in action. All wearing steel helmets, with faces blackened, they amused us rather, and were treated with superior grins.

Moved out in the evening to a Manoir near Conde sur Seulles. Told at least 24 hrs rest, Bn HQ in the Manoir. Slept in a room, ate at a table, sat on a chair, talked to a pretty French girl, who however chewed gum and much preferred to sleep with the SS.

Everyone feeling very happy to be out of the line - not to have to stand-to and lay lines. Unfortunately a Medium Regt had set up shop in a neighbouring field and fired regularly during the night. Slept well though. Had sundry conversation with Monsieur le Marquis and also a bath in his establishment - cost 10 cigarettes. These people very polite and hospitable but obviously not glad to see us.

They were treated well by the Germans and regard us as a nuisance. Advocation of Anglo-Franco-Spanish bloc. Never heard of de Gaulle. Violent hatred of Russians and Americans (toujours le Dollar). Professed admiration of the English who are "vielle", unlike Americans. Told me about Russian agents being dropped in France to sabotage railways. Petain their hero. Many French near here killed by British aircraft and greatly resented.

Standing by to move all day, but nothing came of it, except spoiled our rest somewhat. Had a chance to change clothes and refit. Received good supply of newspapers and found 50 Div in headlines. People went to Bayeux for baths.

Morning's rest. Stacked up to move in afternoon. Went as far as Folliot without incident. This village bombed and shelled to hell. Spent evening talking to 2 men and a woman of the Resistance. Grand people, who have no resentment of their village being destroyed. Watched Thunderbolts divebombing. People said all France behind us - slight exaggeration. Went to bed early.

Set off early. No trouble to La Belle Epine. Resistance on way to Les Orailles held us up. Went thro' Les Orailles and had to stop. Tanks and 88s shelling our positions. 88 thro' window five feet above my head. Dug in rather quickly near farm buildings. Shelled steadily all afternoon and evening. A few casualties. Pte Bready became very drunk on local brew and had to be evacuated under close arrest. Shelling struck me as most unpleasant so far as we had to sit and do nothing. Could not attempt our objective - Le Lion Vert.