The marriage of Germaine Deru and Basil Brooks, cut short by the Battle of the Somme

Germaine Deru was the sister of Jeanne, my Belgian grandmother. During the First World War Germaine travelled to Oxford, England, possibly to learn English. There, she met and married an Englishman, Basil Benjamin Burgoyne Brooks. Basil had joined the 1st/4th Oxon Bucks Light Infantry and became a Captain. A few weeks after their marriage, on 23rd July 1916, he was killed on the Somme. 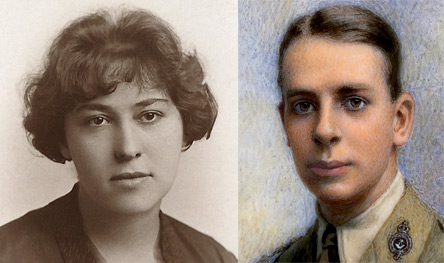 Basil and his sister, Gwen, were children of Alderman E J Brooks who was Mayor of Oxford in 1906-7 and a Justice of the Peace. Richard Moore [Major R J Moore, Military Knight of Windsor and son of Gwen] was later shown by an aunt a note she'd received from one of Basil's brother officers, describing the tragic events of that day.

Basil received a head wound and may have inadvertently wandered towards the German lines. The day after he'd gone missing, two of his men went out and found his body. They buried him, marking his grave with a cross. He was subsequently buried in Plot I. C. 44 at the Pozieres British Cemetery, Ovillers-La-Boiselle, Picardie, France, where his grave is marked with a crucifix headstone.

In St Michael and All Angels C of E parish church in Summertown, Oxford, there's a stained glass window in memory of Richard Moore's grandparents, Edmund and Elizabeth, and Basil. There's also a brass plaque in Basil's memory. His family were staunch C of E, his father being a Church Warden at the same church.

More recently a large crucifix dedicated to Basil's memory has emerged in an RC church on the Woodstock Road SS Gregory and Augustine. The Moore family assume that the crucifix was organised by Germaine, a Roman Catholic.

SS Gregory and Augustine happens to be the church in which I was baptised in 1948. The connection is Vi Brooks, friend and next door neighbour to a Mrs Constable who lived in Banbury Road, Oxford. Vi introduced my parents to Mrs Constable in 1948 and when I was born in that year, my father (Ken) and mother (Francoise) moved into rooms in Mrs Constable's house.

Vi (Richard Moore's mother's cousin) received an MBE for her therapy work with shell shocked soldiers. Richard visited Vi at her home on the Banbury Road for speech therapy. She was very good and succeeded in training him to get over a stammer where others had failed.

The picture of Basil (above) was sent to me by Phil Moore, son of Richard Moore. Phil, a graphic artist, digitally restored the portrait from a miniature owned by his father. Until 2006, the Moore family knew almost nothing about Germaine, except that she was a 'Belgian lady'. It was an Internet search by Phil that found her name on this page of this website. Phil got in touch and we exchanged information about our respective ancestors. He wrote:

The more I've found out about Basil the more tragic and moving the story has become. Basil and Germaine's short marriage is surely the premise to a great, if not sad, love story, contrasting deeply with the horrors of the Somme offensives, that took so many good men from every walk of life, regardless.

I/we knew nothing about the crucifix until recently. It is my theory that Germaine was probably RC and gave the crucifix in his memory... When my present wife Jenny and I went to see the crucifix we attended the Saturday evening Mass. They replaced the altar cross with Basil's for the service, a very nice touch. They use the crucifix during the Good Friday Liturgy.

The photograph of Germaine was subsequently given to me by my Belgian aunt Bernadette in the spring of 2007. She's the only person who remembers anything about her aunt Germaine - known as Tante 'Maine. The portrait was taken by H.P. Hider of Spring Bridge Road, Ealing West - exact date unknown, but Richard noticed that the brooch on her dress (see photo) seems to be the three pips of an army Captain's rank insignia. If this is correct then the picture may have been taken after Basil's death. 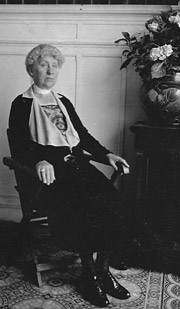 Germaine was Bernadette's godmother as well as aunt. When she later married a wealthy sheep farmer called Kelly and went off to live in Rhodesia, she jokingly promised to buy a cow that would be adopted as Bernadette's and the economic proceeds from the cow's life would be hers. Needless to say, nothing was ever returned. The only family member who saw Germaine after she had moved to Africa was my Belgian uncle, by which time she was very infirm.

She was very much the favourite daughter of her mother (Armande Deru, inset) and was very attractive and outgoing. In those days young women didn't go out alone, so her mother had to go out with her on a frequent basis. Germaine spoke a lot about "Aunty Mary" [Richard Moore's great aunt and the mother of Vi Brooks]. Apparently she didn't refer to Basil as Basil but used another name that Bernadette can't remember. She told Bernadette that when Basil went 'over the top' that day on the Somme, he was one of the first over and he went up shouting "Hallo Boys!" at the Germans (shortly after which he was killed).