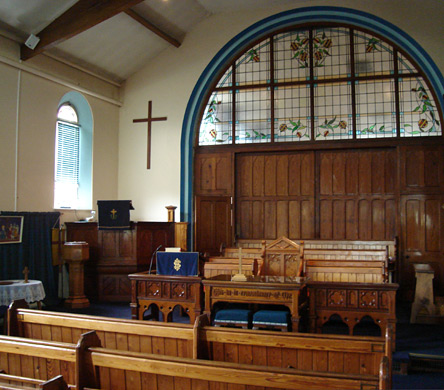 My great grandfather, Thomas Hughes Parker, was Minister of Bourne United Reformed Church before he moved to New Chapel in Horwich (around 1907), where he was Minister until his retirement. Thomas and his second wife, Ethel (neé Branston), then moved to West Bridgeford near Nottingham, where he died at 82 in 1946. Thomas was buried in Bourne town cemetery, and Ethel, who died at 83 in 1959, was buried next to him in a joint grave.

The interior of the church has changed little over 100 years and the photo above, taken on April 3rd 2008, shows it very much as it would have been in Thomas Parker's day. The front pew on the left is where, until she was 12 when the family moved to Horwich in the North West of England, Emma Parker (who became my grandmother) sat with her stepmother Ethel while her father Thomas preached sermons from the pulpit (far left, below the cross).