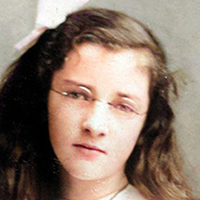 Emmie Taylor's childhood memories of Bourne, Lincolnshire, written in 1974 when she was aged 78

For her granddaughter, Lois

I WAS BORN at Bourne in Lincolnshire on June 11th 1895. Bourne is so different from anywhere that you have lived that I thought I would begin by giving you some description of it.

It is a little market town in the centre of farmland, and although its population was only about 3,000 it was looked on as quite an important place, because it was the centre of all the little villages round about. You might be interested in some of their names, Thurlby, Morton, Hanthorpe, Bowthorpe, Toft, Edenham (a beautiful village) and it adjoined the hamlet of Grimsthorpe, where was situated Grimsthorpe Castle and Park, the seat of the Earl of Ancaster, who owned a lot of the land round about.

Every Thursday was Market Day, when the farmers from round about used to bring their produce and sell it on stalls set up in the Market Place. Of course they came by horse and trap. Many of their wives came with them and sold their homemade butter, eggs and cream in the Butter Market, which was a covered place under the Town Hall and next to the Fire Station.

Twice a year May and October the "Status" was held, the May one being the more important. On this day the farm maids and the farm labourers would come into the Market Place and be hired by the farmers for a year. If they were single, which most of the girls were and many of the young men they would live in the farmhouse. There would in most cases be a separate staircase for them, as that their part of the house was a separate part from where the farmer and his family lived. They would have their meals in the big farm kitchen. They got very poor wages, but as a rule were very well fed. The married farm labourers would live in "tied" cottages. They usually got an allowance of milk a day and often eggs from the farm and most of them grew their own vegetables and kept a pig.

There was only one hill in the whole district, up the West road at Bourne. I do not suppose it was more than 150 ft high, but it was looked on as a great climb and from the top on a clear day one could see "Boston Stump", a great landmark. It was the tower of St Botolph's Church at Boston, from where some of the Pilgrim Fathers went. Bourne is quite an historical town. In the Wellhead Fields one can see the remains of the moat and the raised ground on which one of Hereward the Wake's castle was built. Near the station was the old Red Hall, where Sir Everard Digby, one of the Guy Fawkes plotters lived.

In the Market Place is the Bull Inn, where Elizabeth 1st's great Lord Cecil was born. He later became Lord Burghley and built Burghley House at Stamford. Tennyson has a poem about his romantic marriage to a village girl which I knew as a girl (the poem I mean). Then Worth who became one of the great fashion couturiers in Paris, was born in Bourne, but I cannot tell you where. One of the great beauties of Bourne was the woods which stretched for a long way East and North from the top of Stamford Hill. In the spring they were carpeted with primroses, wild violets and wild anemones and in the summer the nightingales used to sing and there were hazel nuts in the autumn and beautiful autumn colours. It was originally part of Sherwood Forest.

We had all natural spring water piped to the houses from 28 (?) springs in the Wellhead and nearby were the watercress beds.

The workhouse was a large gaunt building in a field adjoining the Wellhead Field. Hundreds of years ago there used to be an Abbey, but I do not know when it was destroyed, but the beautiful old Church is still called the Abbey Church and behind it running down the right hand side is a long field which is called the Abbey Lawn, where many important events take place.

Running down the right hand side of South Street is a small river which must go underground somewhere, because it comes out parallel with Coggles Causeway and further on falls several feet which works the water wheel for grinding the corn. I do not know if it still works, but you will hear about it in my reminiscences. Well up to the North Road there was a windmill, which also ground corn, but has since been pulled down. Since I have been married I once went to Bourne to open a Congregational Church Bazaar, which was held in the Corn Exchange and in 1938 Auntie Joyce and I went for the day from Hunstanton and it had not altered much then, but a few weeks ago Franklin Engleman did a "Down You Way" at Bourne and he said where the station used to be is now a thriving dried pea factory, because there is no railway line there now.

I have written this little history and drawn the maps of West Street and North Street. You will find from the official map of today that some things have altered and you will find more particulars of the History in the little book.

Childhood at Bourne with Auntie

I was born in a villa on the right hand side going up North Road. I suppose today they would be called semi-detached houses, although they were very different from the semi-detached houses of today. A bathroom in such a house was unheard of. Possibly there would be a cold water tap in the scullery or washhouse. In this line of villas there were two on the north end, then a little lane which ran round the back of the house so that ash carts and the closet carts could get round the back to empty the ashpits and earth closets. There were then eight semi-detached villas below the entrance to the lane, of which ours was the one nearest to the entrance to this lane. Below those was a large house where the two Miss Butterfields lived and this is now the Cottage Hospital.

I was born on June 11th, and on July 1st my mother died. My mother had a great friend called Miss West, whom I always called Auntie West. She used to tell me about when I was a fortnight old she came one day and found me crying in my cradle. She presumed I was cold as they had taken every blanket to cover my mother. My father only got £120 a year and they had to set up house, so I suppose they had no money for spare blankets. She picked me up and took me on her knee, turned up her long skirt (all ladies wore skirts to cover their ankles) and wrapped me in it. While she was seated like this the doctor came, and how embarrassed she was that a man should see her with her skirts up, although she would have at least two long petticoats underneath it.

My grandma Curry came to Bourne and took me back to Hartlepool with her. Then I suppose there was a discussion as to what should be done with me, and who should look after my Father and me. My Father and Mother had been very much in love and she had been a great help to him in his work, so I suppose he was absolutely shattered.

As I have told in the short accounts of the family he and his youngest sister Auntie Maggie had always been great friends so she took me back to Bourne. I suppose really she intended to stay for a little time because she was only 24, and was engaged to be married, but later on she felt she could not leave us and she broke off her engagement. I am afraid I shall never be able to give you a true impression of what Auntie Maggie and Auntie West did for me. We lived in a house up the North Road until I was 2 and I have no recollection of leaving it or of going to the fresh house, which was at the other end of the town, but I have two vivid recollections of it. One was of running across the back lane, and into the garden which was across the lane to my father who was gardening and wearing a straw "cooly" hat. There was rhubarb growing at the bottom of the garden and a wooden fence which was green with moss. I remember running into my Father's study one morning and being taken aback by the darkness as there must have been a dark green or dark blue blind which had not been pulled up from the night before.

Do you know what a straw "caddie" is? If you have seen Maurice Chevalier on the TV or a picture of him, he always wore one. They had a flat straw brim with a flat crown with a ribbon round, something like this! [drawing here] (oh, my awful drawing). They were just coming into fashion and were very modern. Young ladies wore them, only they called them Sailor Hats, especially if they were very forward young ladies who wore "bloomers" for cycling.

I cannot remember the name of the little bit of road, where our next house was, but it was next to a farm which was at the bottom of Coggles Causeway. Our house was opposite to the little river which had just come from the place where it worked the water mill. You will see I have marked the houses where we lived house 1, 2, 3, 4. This house was really too big for us and we had not enough furniture for all the rooms. It faced right on to the street and we had two front rooms, but only one furnished, so sometimes we used one and sometimes another. At the back was my Father's study which was a very pleasant room with a bay window looking onto the garden. Then there was a back hall, a large pantry, a kitchen and a coal house cum wash house. In the kitchen we had a little corner cupboard on the floor which did not fit right to the wall, so sometimes if Auntie and I were sitting in the kitchen in the evening we would sit very quiet and a mouse would run from behind the cupboard. We got a lot of mice with being next to the farm, so we always had to have a car. Oh, I forgot to tell you that when we lived at our first house I had measles and just at that time we got a cat, so they named it "measles", and Auntie said that if she used to say "measles, Baby is crying", it would come running to where I was in my cradle. I do not know what happened to measles, because I do not remember it.