An article by Mrs John Taylor (Emmie) about the family business, written in 1974 when she was 78 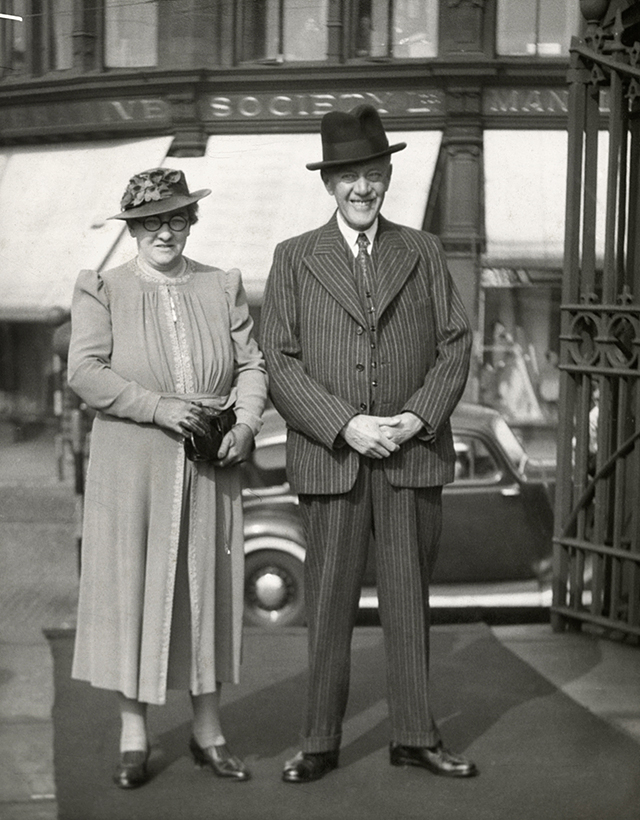 Emmie Taylor with her husband John attending a function in Manchester, probably 1950s 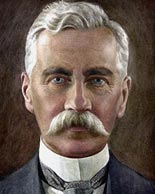 In the later years of the 19th century and until 1903 your Grandfather (W.T.Taylor) and John Taylor (Daddy) worked for John Ainscow & Co. W.T.T. was inside manager and I think John worked partly in the office and partly in the warehouse. John started there in 1897 when he was 17.

When Uncle Harry was young he worked as a joiner, but later he went to the District Bank, now incorporated into the National Westminster Bank Limited.

W.T.Taylor [photo] and John Ainscow were totally different characters, with opposing ideas of business, and eventually in 1903 they had a strong disagreement and W.T.T. said he would leave. John Ainscow went to John and said "Your father is leaving me, but I suppose you will stay on", but John said "If my father is going, so am I." Grandpa Taylor (W.T.T.), who was 55, then took a very courageous decision to start a towel mill in Horwich. There was a shortage of work for female labour in Horwich at that time.

Grandpa Taylor had very little money, but he decided he would not start to build until he had raised £10,000, so he and Granny Taylor went round to all their friends and relations asking them to invest in the venture. W.T.T. was a man of great integrity and people trusted and respected him, so much so that many lent him all their savings. They have been repaid many times over, but it was a great risk at the time. They got a little here and a little there, until they had raised £8,000. It was a puzzle where the last £2,000 was to come from but Grandpa Taylor went to see Alfred Holt, who put £2,000 in provided he had a seat on the board. A Mr Hulton had invested quite a good sum, provided his son was given a position.

During this time Uncle Harry was earning money, but it was necessary for John to earn something. He had a friend, Arthur Entwistle, who worked at the telephone office, and he got a job for John going round to individuals and firms persuading them to have telephones installed. Not many people had telephones and he was to work on a commission basis, and he was soon earning £7 a week, which was a very good wage for those days. Arthur Entwistle said he had better ease off a bit, as he was earning more than the Office Manager. John said it was the easiest job he ever did, but the experience he gained was invaluable when he started to sell for the mill. At last the mill was ready and they were able to start manufacturing with 100 looms. John was appointed salesman and he used to do the books at night. His salary was £100 a year.

Grandpa Taylor (W.T.T.) knew all the technical side, but he knew little about business. He did not know that a lot of the stuff they made at Ainscow's was for the Indian market, so when they started to make that, and John to go round of course, he could not sell it.

Now came a very worrying time. Grandpa Taylor was nearly frantic, because he thought he was going to lose his friends' money. With the worry he developed jaundice, and Granny Taylor was very ill with pneumonia. John was sleeping with his father, who paced the room at night, not being able to sleep with worry.

Up to now they had lived at the Wrekin Villa, nearly opposite Princess Road, and the Fletchers lived next door at Careton Villa. Auntie Sally was nursing in Liverpool and she and Uncle Harry became engaged.

The Taylors had moved to Fall Birch (No.30) about this time.

At last one week they had not got money to pay the workers' wages. Grandpa Taylor went to see Colin Cooper (Brian Cooper's Great Uncle) to see if he would help him. He lent him £5,000 and said "If you need any more, come back."

As I have said, W.T.T. was very clever technically, and he found out how to weave waste yarn, which had never been used before. They made a towel of alternate stripes of white and waste yarn with a thin red stripe at the bottom. Of course it was much cheaper than other towels and John took it to Mr McAppin, the buyer for Watt's Warehouse, and he bought 1,000 dozen. It sold like hot cakes and for 2 years they had this trade to themselves. This put them on their feet and from then on the mill never looked back. The towel was given the number ST9R and John always had a soft spot for it. I don't suppose you make it now, but I have some roller towels made from the same design.

In 1908 Uncle Harry was still working in the bank and he and Auntie Sally wanted to get married, but bank clerks were not allowed to get married until they were earning £150 a year, so he went to the mill 2 or 3 nights a week to do the books to make his salary up to £150. They were married on July 14th 1908 and it was the first wedding my Father took after he came to Horwich. He started at New Chapel the first Sunday in June 1908.

The first Board of Directors at the mill were:
Mr Alfred Holt (Chairman)
Mr W.T.Taylor (Managing Director)
Mr Hulton (the present Miss Hulton's Father)
Mr Kearsley (who had quite a few shares)
Mr Fearnhead (representative of Horwich Co-op which had some shares)

About the time that Jack was born, Uncle Harry left the bank and went to the mill as full time secretary.

From now on until the 1914-1918 war the mill went from strength to strength, and during the war they were very busy making for the War Office and the Admiralty.

In January 1915 Granny Taylor died aged 63. She was a lovely character. She never turned a beggar away in case she missed one who was really in need. If you went to see her, she always gave you something, either some sweets or an orange or perhaps 6d. When I went to college I wrote to her and she sent a 2/6 Postal Order each to another girl and me, which was very welcome.

I think John and I were engaged a few months before she died. She thought I was very young for her dear John, who was certainly the apple of her eye.

I should think it was about 1913 that Uncle Harry and Auntie Sally built the house at Fall Birch, that is the bottom part.