Relations with the family of Dr Schacht

As told by Françoise in the first person, January 1990.

My father being an economist, and also Bulgarian Consul in Brussels (we sometimes flew the Bulgarian flag in the garden!), was approached by Hjalmar Schacht to receive his son, Jens, in the family in Brussels, and he came to stay with us for nearly a year in 1937-38. He was 27, very clever and forceful. He used to bring me home from the Academy most days, took me to dancing classes and also to the opera - Delibes. My sister Bernadette and I stayed at the Schacht house in Berlin for seven to ten days in May 1938. 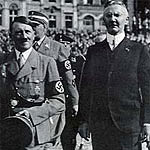 Dr Schacht (pictured with Adolf Hitler) was a stern upright man, but friendly and polite. We did not discuss politics but he took me to the Reichsbank and he told me about money. Jens took us to see the sights of Berlin, Potsdam, the Tiergarten, Hitler addressing a young people's rally in a stadium, a cabaret, a Tschaikovski ballet, Beethoven's Leonora, and the cinema and zoo. Everyone had to applaud whenever Hitler appeared on the scene.

Jens Schacht (pictured with Bernadette) was unsympathetic to the Nazis - had Jewish friends, one of whom he helped to escape to the USA. He left Belgium and eventually went to the Russian Front where he died in April 1944. We learnt this in about 1950 when Dr Schacht came to visit my mother not long before my father died. The first time he tried to visit us after the war started Bernadette met him in the garden and would not let him in. He eventually saw my mother but it was an embarrassing relationship.

My mother had the knack of learning languages, and knew German before the war. She learnt English at finishing school, and had learnt Dutch during a period when they were refugees in Holland in World War I. She worked for the Belgian Red Cross during the war, taking pregnant mothers to hospital during the night to give birth etc. She had frequent cause to obtain authority from the Germans in order to fulfil her Red Cross duties, and was sometimes mistaken for a German because of her fluency. I never spoke to any Germans during the war, nor did we ever have any contact with them apart from my mother through the Red Cross. Before the war my mother, having no occupation apart from instructing servants, and apparently not reading very much, seemed to be very frustrated. Her work for the Red Cross during the war gave her a new purpose in life and she changed a lot.

She probably had more personal contact with her grandchildren than she ever did with her own. She seemed very happy when she came to England to look after Patrick, Anthony, and Martin, and had to prepare meals and wash clothes etc. She developed an affectionate relationship with Ken, and got on well with other Taylors - especially 'Emmie' - and also with Joyce's husband Alex, whom she used to tease.

After studying stage architecture at La Cambre, André lived in the Congo where he bought and sold jute for making linen for about seven years, during which time he collected a great deal of African art. He went to the US in the late 1950s and ended up in New York after periods in Los Angeles and Chicago.

He worked for the Belgian Consulate as an Art Appraiser and Cultural Attaché, and afterwards for French & Co in New York. He married Ruth Bratter in the late 1950s. They lived in Chicago until 1964 when André opened an art gallery in New York. André was an avid and gifted art collector and dealer and was devoted to the field. He was an engaging, proud, creative and strong willed person. Much of the art André collected or handled over the years is in museums or treasured private collections now.

André died on June 10th, 1983, after a triple by-pass operation from which he did not regain consciousness. He was a high energy person whose life had always been a succession of peaks and troughs.

Ruth Bratter was born in Manhattan in the late 1930s. Her parents were of German, Austrian, and Russian background. Her three sons with André were Drake born in 1960, Barnaby born in 1964 and Leif born in 1971.

Ruth was an expert computer programmer and also worked freelance from her home for many years. She is quite intelligent, belongs to Mensa, and is accomplished. She was a gifted pianist early in life. She studied languages and acting at Hunter College and Mathematics at Northwestern University. She has been an actress on and off for over 50 years and currently reads and records books for the U.S. Library of Congress.

Drake is an accomplished architect in Washington, DC and a specialist in the building and forensics field. He has been a principal in several firms over the years and has started a family with his second wife Hui.

Barnaby lived with André from 1979 until André's death. They were both in the antique and art business together. Barnaby is a graduate of the top ranked Cooper Union architectural program and has worked with many of the luminaries in the field. He also specializes in building technology and forensics. He now lives and practises in Chicago with his wife Carolyn. Barnaby and Carolyn have also started a family.

Leif is an accomplished musician and writer who has worked in the publishing field for much of his career. He is a gifted event organizer and instructor and very active in his community. He is married and lives in New Zealand.

Françoise died at home in Bolton, England, on 24th January 2007 aged 87. Her devoted husband, Kenneth, was by her side.