A bit of cycling in France

The plan was to put the bikes in the van, drive to various places in France, then ride. It had worked in Germany but not this time. I've come to the conclusion that generally, the French do not cycle very much. I suppose they might somewhere but not where we went. 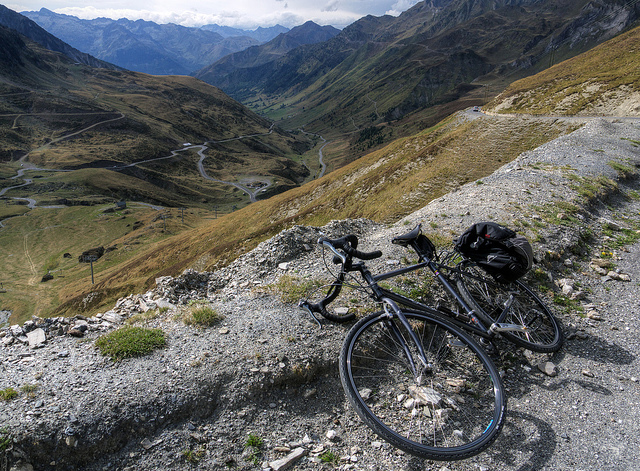 Col du Tourmalet (near the top)

The places we stayed at during almost a month in France: Bayeux (Calvados), Châtelaillon-Plage (Charente-Maritime), Biarritz (Pyrénées-Atlantiques), Cauterets (Hautes-Pyrénées), Sarlat (Dordogne), Loches (Indre-et-Loire), and Calais (one night). Cycling the Col du Tourmalet was a must for me. We also rode along the coast around Châtelaillon-Plage south of La Rochelle. We'd intended to stay on nearby Île de Ré as recommended by my brother but quickly moved on from this ant hill where actually there were many people cycling — it's flat. We cycled various published and pleasant routes in Southern Touraine without seeing one single other cyclist, or pedestrian or horse or even hardly a car. On one of these rides a dog bit my leg so I went to a hospital. 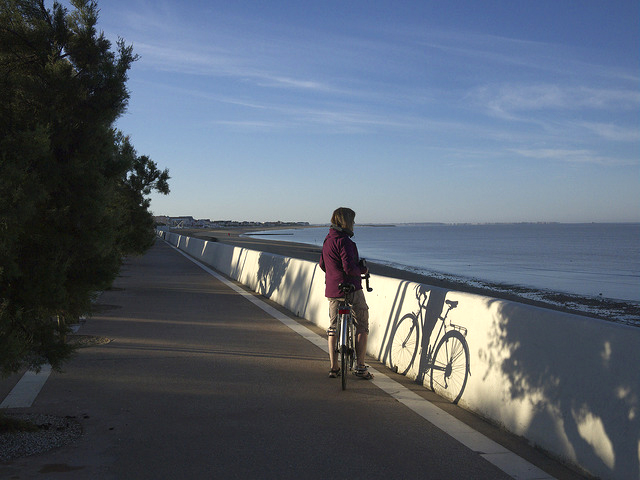 Not that we don't love France. Walking in the Pyrénées is 'out of this world' and anyone who hasn't seen the best French chateaux (Loire region) is missing some 'wonders of the world' — Talleyrand's Valencay has become our favourite. Domme in the Dordogne is one of the loveliest villages. Then wine, empty roads, gorgeous sunny skies, and the fascinating strangeness of the French — plus happy memories of years of family camping in France. But purely for cycling we'll go back to Denmark or Germany where people actually ride bicycles. 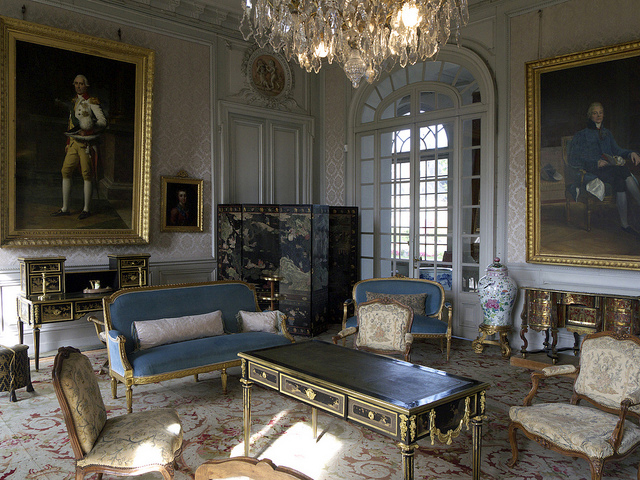 Talleyrand's home, the Chateau of Valencay

For instance we went to the tourist information office in Biarritz and asked about cycle routes and places to ride to. "Non," she said, no cycle routes or anywhere to ride to — and there were no bicycles in Biarritz. It's because Biarritz is hilly. It's a classy town with things to see so it didn't matter.

Le Col du Tourmalet. A 'col' incidentally is not a hill but a gap between hills, occasionally crossed by mule tracks. The Tour de France often goes via the climb up Col du Tourmalet. It did this year. I watched on TV and it didn't look bad at all so the ride became part of our French itinerary. Having now cycled up to the top, stopping only for sandwiches and beer a couple of kilometres out of Barèges, I now know le Col du Tourmalet is not a problem. The most daunting aspect is riding over the painted names of the greats: Voeckler, Contador etc. Once you remember you are not in a race it's just a matter of plodding up 12 miles of 7-8%, steering round sheep resting in the road. It's cold going back down. 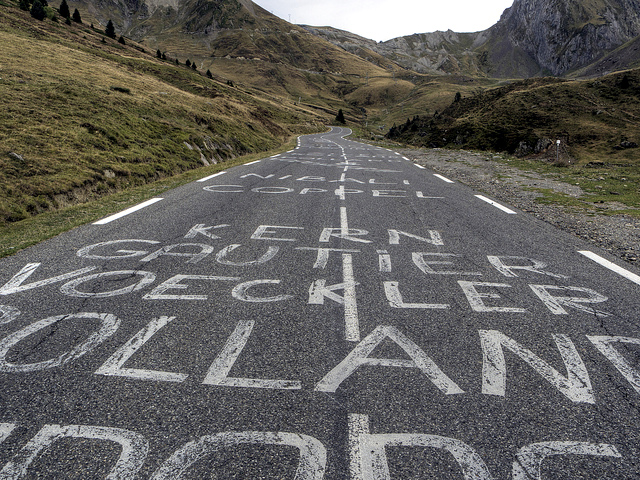 On the way up Le Tourmalet

On my way up an English chap riding down called out: "Well done Patrick!" (how he knew my name is a mystery). 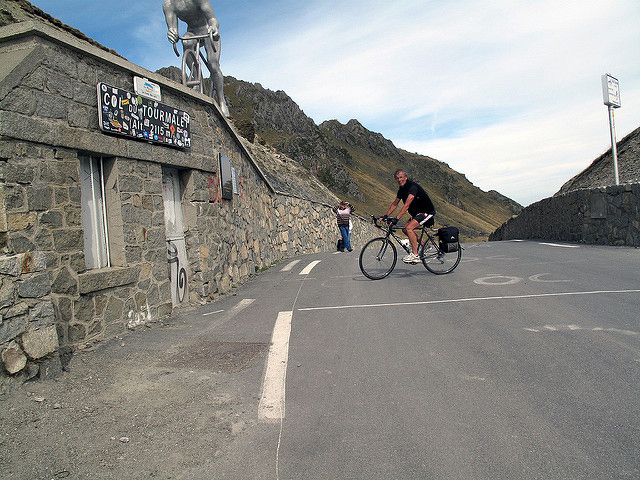 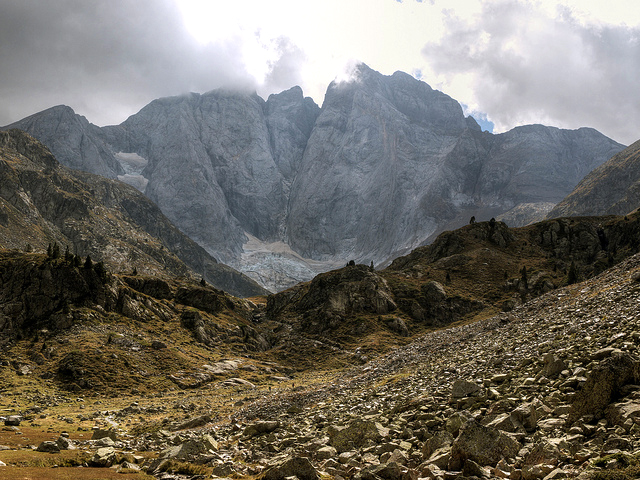 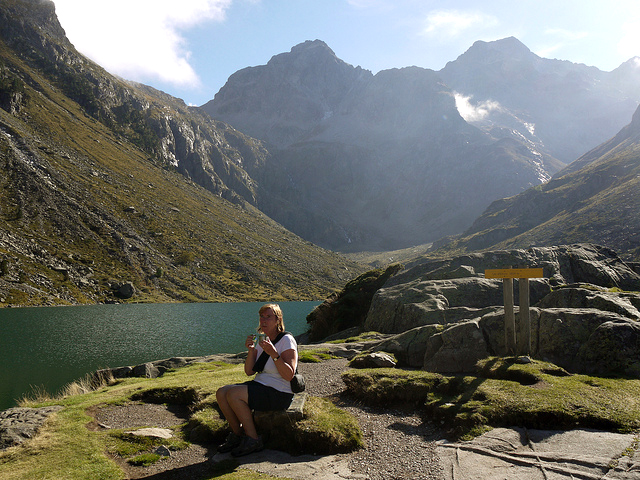 A few days later, in Sarlat, some French fellow-campers went off for the day on their bikes. Afterwards, on a map, they showed us the route — a disused railway line in a rocky ravine in the middle of nowhere. More encouraging was a pamphlet we found in Loches, titled: "200 km of cycle rides. Get to know the landscapes and treasures of Southern Touraine..." About a dozen routes were illustrated, from 10 to 40 kilometres in length, and we cycled a few over several afternoons. They are actually very nice (even if nobody ever cycles them — complete absence of tyre tracks on the off-road sections). Quiet single lane farm roads and paths through the Forêt de Loches in rolling countryside. Really quiet. No-one. Not even horse droppings. But you might see a dog. One saw me and ran up barking. It buried its teeth in my leg. "It's your own fault," said Sandra, "trying to kick it." The owners appeared from a farm shed and apologetically assured us that it was un bon chien.

A doctor at the hospital asked me about this dog. Did I know it? A country dog, I said, and I don't know it. He insisted I go back to the farm (or whatever the place was) this evening and ask to be shown the dog's vaccination certificates and that if none were forthcoming and the owner wouldn't agree to take the dog to the vet the following day (a Saturday) I should report them immediately to the local Gendarmerie then go somewhere (on Monday) to be tested for rabies. So in the evening we went back to the countryside and found the owner (a nice young lady). She got out the certificates, valid until May 2013. It meant I was allowed to return to the UK.

*The inhabitants of France cycle even less kilometres per unit of time than those of the UK. In Europe, only Spain, Portugal, and Greece cycle less than France. But they know how to live:

If we had been committed to cycle touring instead of going in a van with the bikes inside it would be different, but then you are 100% committed to cycling and all the pleasures and occasional hardships of travelling that way. Even so, France for us is unlikely to be a natural choice for a cycle tour. I think we'd find it too monotonous (and hot in summer). At least that is what I was thinking, driving through the endless countryside. 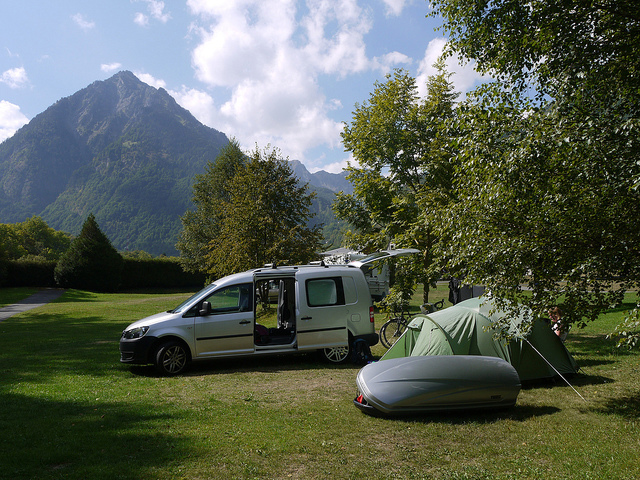