Cycling along the Moselle 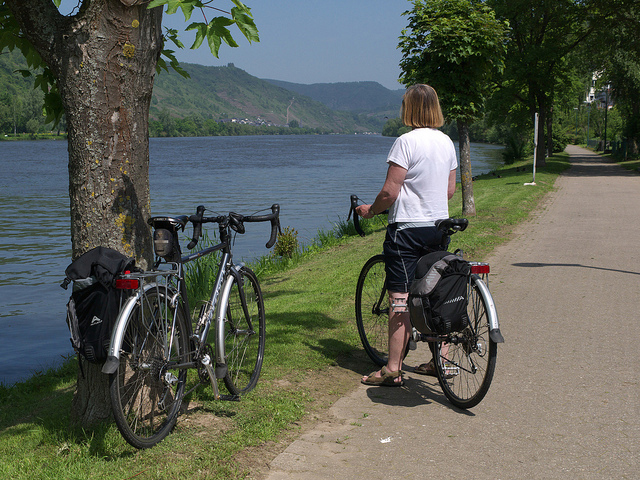 The rivers that flow northwards from Germany and Eastern France are interesting. The Rhine, really a German river (Rhein), flows from Switzerland through Germany as far as Holland where about two thirds of its water volume becomes the Waal, going west where the river splits just before Nijmegen. The other third goes north to Arnhem where it divides again, part going west as the Neder Rhine (Nederrijn) and reaching the sea at Rotterdam (by which time is has become the Lek), and part going north as the IJssel to the IJsselmeer. The Rhine itself never reaches the sea.

Northeastern France, most of Luxembourg, and a small part of Belgium drain to the Rhine via the Mosellele - Moselle in German. The Moselle and Rhine come together near Koblenz. The name Mosellele comes from Little Meuse. The real Meuse (Maas in Dutch) is another river flowing from France through Belgium to Holland where it becomes the Waal, joining some of the water from the Rhine. Anyway, except for some Rhine water going north to the IJsselmeer, everything ends up in the English Channel at the Rhine–Meuse–Scheldt delta south of Rotterdam.

All this may be a simplification as the Dutch safeguard their existence with dams, dikes, causeways and the rest of it. They mess with the rivers. We've seen this on cycle tours of the Netherlands and cycled across massive dams and seen ocean liners parked in Amsterdam (which is nowhere near the sea). To try to make sense of it all, this May we went to the Moselle, a region of natural beauty where the river flows through a steep-sided valley and you can cycle along the river on both sides. Sandra likes it fairly flat and as a bonus, this is wine-growing country, and warm.

By contrast our first night's camp was 3 degrees centigrade but this was in Belgium at Tournai. The daytime temperature on the M6 in England had been 5 degrees with hailstone but we guessed it would be summer in Germany. Overnight at Rochefort was getting warmer but in the Belgian Ardennes the weather is famously strange. In the coolness we cycled the RAVeL route Jemelle - Houyet which passes through Rochefort then moved on towards the Moselle via a stunning national park in Luxembourg and the historic town of Vianden. 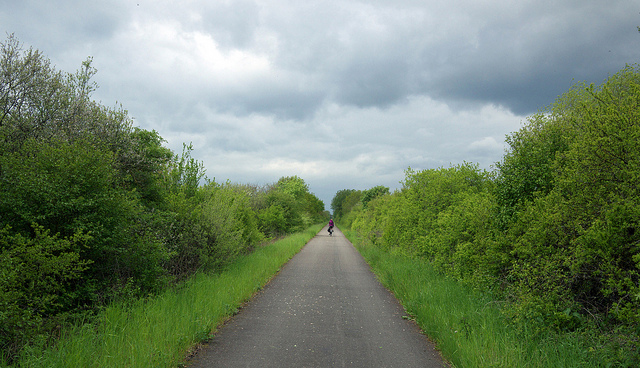 We came to a place called Schweich on the river near the German city of Trier and decided to camp there for a couple of days. To clarify: we were driving from place to place and cycling when we got there, not actually cycle touring. Schweich seems to be the start of the steep-sided valley part of the Moselle - the scenic part - and the camp site was nice enough. We cycled down river as it winds back and forth between the hilly sides, maybe 40 miles round trip. Near Detzem we watched a river barge pass through a lock with a wier at the side. At these locks you realize the Moselle river consists of a series of reservoirs to maintain the water level. Without them the Moselle would be much narrower with rocky sections that would be unnavigable except by canoe, but the river is wide with freight and cruises going up and down. 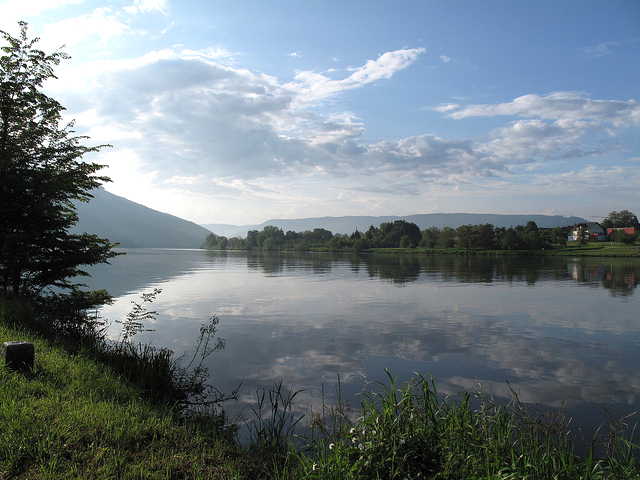 You also notice the motorhomes parked along the banks, mostly on camp sites but also in designated parking areas with no services. Together with caravans there are surely more people living in fibreglass boxes than actual buildings - thousands of retired people come to enjoy the warmth, the scenery, and the wine (but not the food unless you cook it yourself). Perhaps it's good. It saves pretty little towns becoming over-developed and means that out of season the natural character of the region is restored.

The plan was to work our way downriver as far as Koblenz where the Moselle valley ends, stopping along the way to cycle up and down the cycle paths along the river banks. Then we'd drive to Düsseldorf to stay with some friends before travelling back via Bruges in Belgium. From Schweich we drove down the river and found a small camp site at Zell. The German holiday weekend was now over and the site was almost empty. Idyllic in fact, with the tent just a few feet from the water and a lovely view of the town on the opposite bank. Added enjoyment was swans, geese, and ducks quacking around the tent. 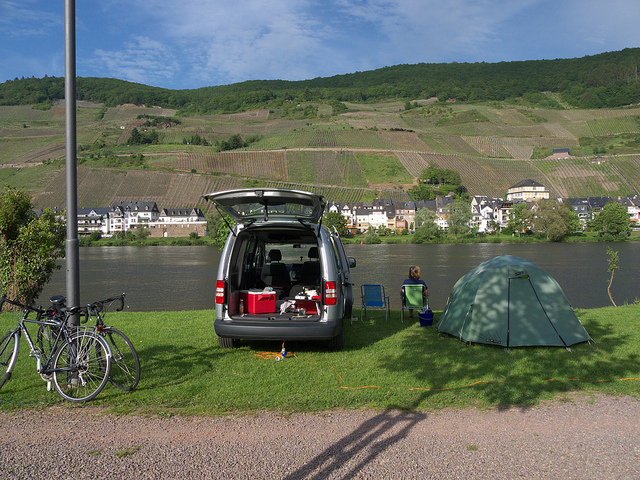 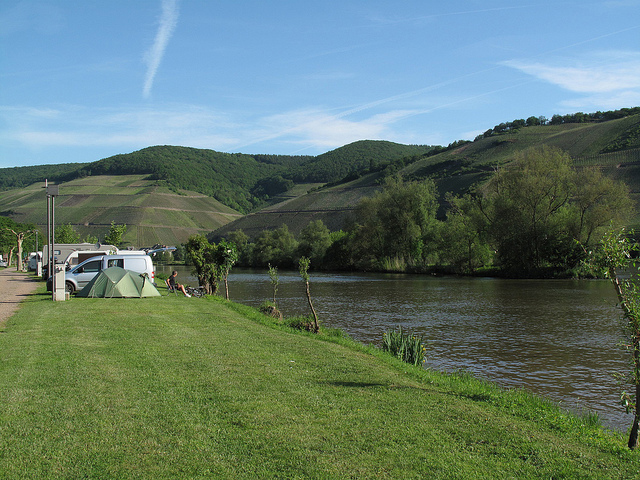 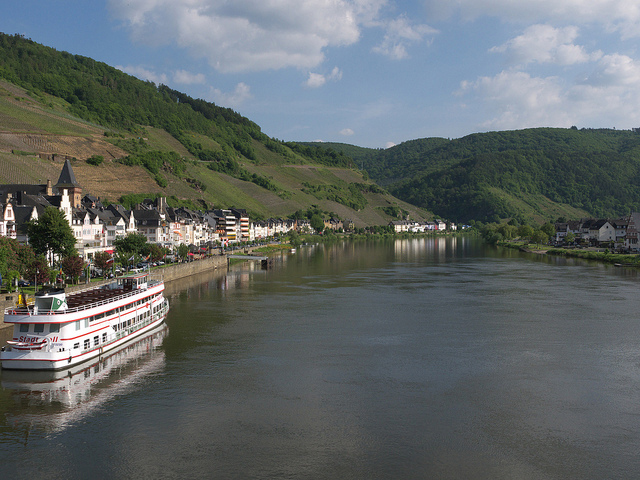 Zell on the Moselle

Zell seemed the nicest place along the whole of the river. We booked for three days then came back for another two after driving further up towards Koblenz and passing a number of camp sites we didn't fancy as much. It's strange how foreign places soon seem like home. Perhaps it was the shower block straight from the Porsche factory, or the nice lady at reception, or the German couple who invited us out for a meal, or the town band... but most likely because we'd got to know the ducks and liked how quiet it was.

Over the next few days we cycled up and down the river, either from Zell or after a short drive further along. Cochem is nice. Other places are nice - Trarbach and villages whose names I've forgotten. The cycling was gentle and lovely. You go up one side, cross over a bridge or ferry, then cycle back along the other side, which seems like a different place altogether. Weather: sunny. Temperature upper 20s to 30 degrees. Flask of tea, sandwiches, Schoko Butterkeks - great!

You need a bicycle on the Moselle. From the valley there appears to be no walking. The steep valley sides are either heavily wooded or sloping vineyards and the bike allows you to move easily along the river winding from village to village. Everyone does it. The cycle paths are mostly flat but sometimes rise up then down again a few miles later. The landscape is gorgeous, spoiled only by clumps of motorhomes at frequent intervals. There may be some history to visit but this was essentially a relaxing cycling holiday in fine weather. Plus I have a slightly better appreciation of the river system that ends up passing through Holland. 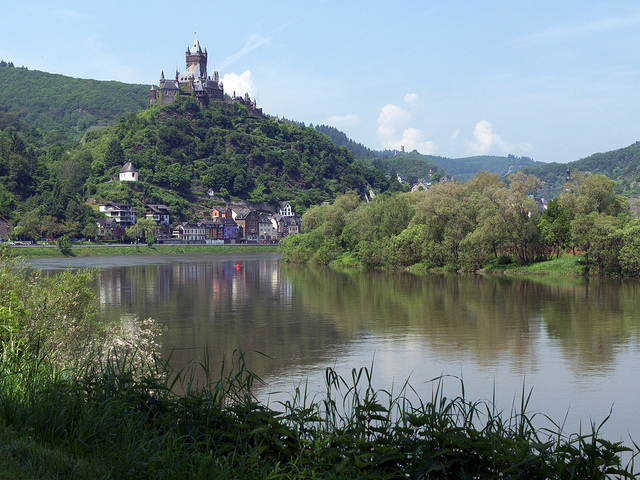 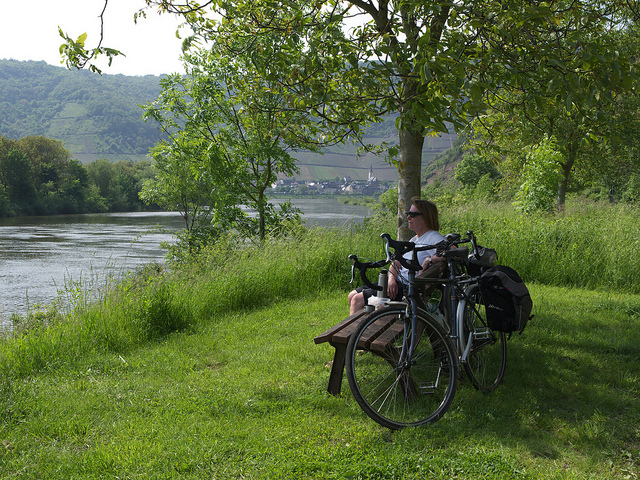 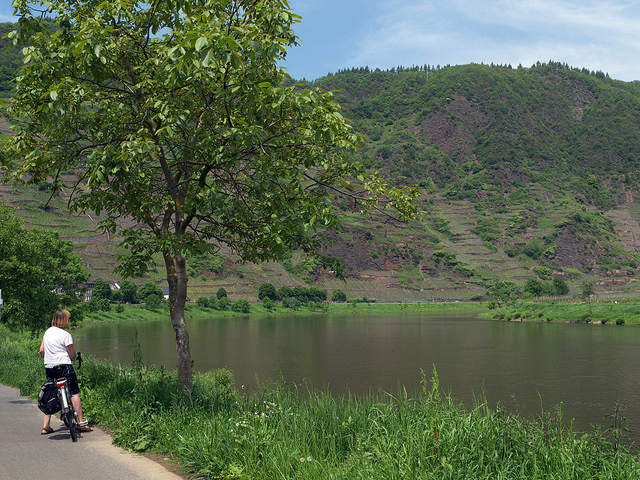 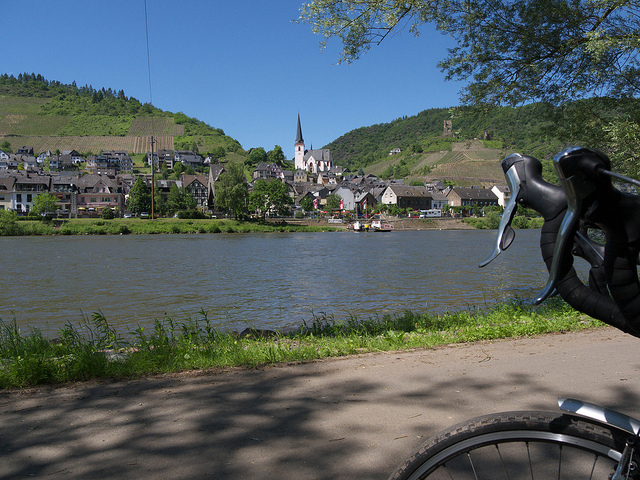 We returned past the Nürburgring in the Eifel hills, cycled and walked with our friends for a couple of days, and spent a night and day in Bruges. As usual, the traffic driving home up England was blocked around Dartford, blocked around Rugby, and blocked around Birmingham. We contributed to it of course.

The drive'n ride approach went well. Touring with bicycles is not a substitute for real cycle touring. But living in the North of England you have somehow to get to the south coast to reach most of Europe, or pay for an overnight crossing from the east coast. And then to get to the real destination, in this case a distance from the channel ports. And Düsseldorf afterwards. Not easy just with bicycles. Drive to Dover, short crossing by boat, and away you go. We slept in the van three nights (when it was cold or noisy) and the rest in the tent using the van as a store/kitchen/reading room - will repeat this formula in France later in the year. 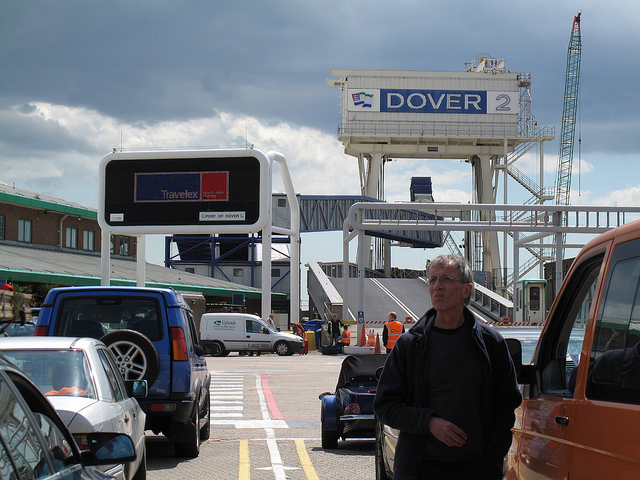 On the way: looking back at the white cliffs

The only blip on this pleasant trip was Rochefort in Belgium. It seems a nice little town but when I asked the camp site lady: "C'est calme?" - it was a Friday - she apologised for a festival going on in the centre and said the noise would stop at 11 pm. The festival of laughs, or something. The noise began at 11 pm and went on until 3 am, with music played so loud it shook the ground. I reckon it's best when planning a trip to mainland Europe to check the dates of public holiday (long) weekends. In France do not attempt to camp on the night of 14th July.

Apparently (according to our friends) this sort of thing is illegal in Germany. Anywhere else, watch out.