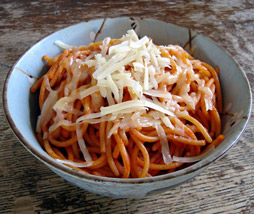 Is it my imagination or do different shapes of pasta taste different?

Although pasta lends itself to fancy sauces and other extras, good quality well-prepared Italian spaghetti tastes delicious with hardly anything added. We're interested in the pasta, not the sauce. So here's a spaghetti recipe with basic ingredients and it does taste delicious. The aftertaste is delicious too, so this spaghetti is best enjoyed with nothing to follow.

Snap the spaghetti into thirds, put it in a pan with a good amount of salt, then boil it in water for one or two minutes less than instructed on the manufacturer's packaging. When boiled, pour it into a sieve and wash it under the cold tap. Squeeze about half the tube of tomato purée into a cup and dilute it with water, stirring with a spoon until it's a consistent runny liquid. Pour the spaghetti back into the pan together with the diluted tomato purée, a generous splash of olive oil, and a big blob of butter.

Turn on the heat again and continually stir the mixture with a wooden spoon, adding a little more water so that the bottom of the pan is quite wet. Now cook the spaghetti for a further three or four minutes until the bottom of the pan is dry and the strands of pasta have turned a consistent reddy colour. Continual stirring is vital to fully spread the tomato paste and to prevent the spaghetti from sticking to the pan.

When done, pour the spaghetti into an airtight container and put in the fridge overnight.

Re-heat the spaghetti in a pan. Evaporation will have dehydrated the pasta a little, so add enough water and a little olive oil to make the mixture wet again. In the final phase of cooking, the water content and continual manipulation of the pasta with a wooden spoon as it starts to hiss in the pan are crucial. It should never be allowed to become sticky (with too much water) or to burn (with too little water or stirring). It must be constantly on the move. After a few minutes, when the bottom of the pan is more or less dry, with a thin coating of browny-red tomato burnt onto it, the spaghetti is done.

Serving and eating the spaghetti

Allow the spaghetti to cool for a couple of minutes, then serve it in smallish pasta bowls to be eaten with just a fork. In small side bowls (one per person), provide the grated mature cheddar cheese. The cheese is added in small amounts as the spaghetti is eaten. The trick is not to allow the cheese enough time to melt on the pasta but to continually add it by hand in small sprinkles as you eat, so it's just starting to melt as the food goes into the mouth.

I've eaten a lot of spaghetti in many restaurants over many years, and it never tastes better than when done this way. Of course it helps if you like cheddar cheese.

genius! the last sentence is the best!

Thenks for sharing the recipe. I've been looking for a delicious non-meat spaghetti recipe and now I've found one.

Sounds interesting... but no garlic? No oregano? And forgive me, I mean no offense, but spaghetti is meant to be cooked whole and eaten whole, in my humble opinion. Twirling the spaghetti on ones' fork is part of the delightful experience of eating spaghetti!! :)

You might be right about fork-twirling when the spaghetti has just been cooked for the first time and is slippery, but when re-heated (new research proves this is really how to eat it) it's better chopped up (cos it ain't so slippery no more). IMO.

I can imagine that reheated spaghetti would have lost much of the ability to twirl very well. Pasta in any form is delicious and such a comforting food that the important thing is to simply enjoy it, wouldn't you agree? Your spaghetti does look very appealing in the photo!! I just noticed that it's in a bowl that I have also. The presentation is very pleasing! Thank you for sharing your recipe. It will be interesting to try your recipe! Warm regards, PJ

Well, they taste as if they taste different. The pasta that looks like a bowl of maggots (can't think of its name just now) definitely tastes different to spaghetti. My brother, who thinks he knows a thing or two about this, says that different thicknesses taste different and no.17 is his all-time favourite.