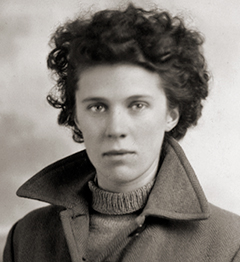 FRANÇOISE TAYLOR (née Wauters) was my mother. Born in Bressoux, Liège, Belgium on January 1st, 1920, she died aged 87 in Bolton, England on January 24th, 2007. After leaving school Françoise studied art for four years at the Académie Royale in Brussels where she won the First Prize for Drawing in three of those years. She then spent a further four years at l'École Nationale Supérieure d'Architecture et d'Arts Decoratifs (La Cambre), also in Brussels, studying engraving, typography and book illustration. There, she won a Diploma with Highest Distinction, which led to a grant to work for two years more to produce a portfolio of drawings and engravings. For this, Françoise Wauters was awarded the Masters Degree for Book Illustration – the first in Belgium. See francoisetaylor.com »

The art of Françoise Taylor

Her series of engravings 'Pointes Sêches sur la Guerre' was based on her experience of living in Belgium during the German Occupation, with the Deportations and the Allied Bombardment. Françoise's literary interests led to a series of engravings for works by Kafka, Dostoievski, and Conrad, amongst others. These interests were extended when she moved to England after the war, producing illustrations for Alice in Wonderland, Malory's Morte d'Arthur, and Coleridge's The Rime of the Ancient Mariner, as well as various stories and nursery rhymes. 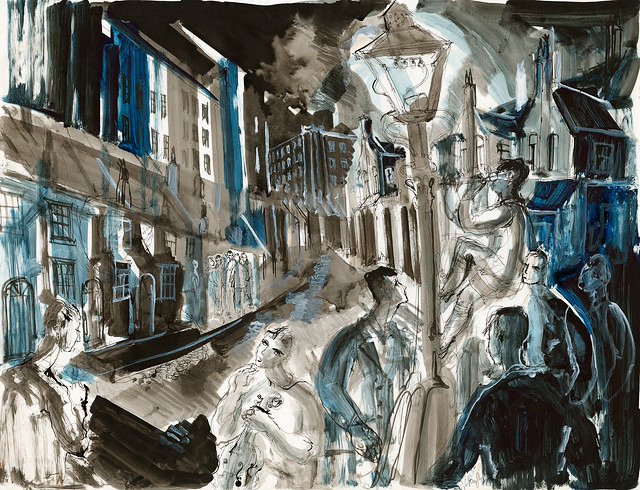 After living in Oxford for two years, Françoise moved to Bolton in the North of England where she became fascinated by the buildings, street life, and parks of a Northern industrial town. Her wanderings led to a large collection of drawings and watercolours inspired by what she saw, which are a unique pictorial record of life in Bolton in the 1950s.

Many of her later works arose from a continued interest in Alice in Wonderland and The Rime of the Ancient Mariner. In these and many other drawings and engravings her interest in the life of animals was frequently apparent. Françoise Taylor held 'one-man' exhibitions in Brussels, Liège, Manchester, Salford, and Bolton, and her works have also been exhibited in Paris, London, and various other English towns and cities. Most of her etchings are in the permanent collection in the Cabinet des Estampes in Brussels and several in the Cabinet des Estampes in Paris.

Françoise was the daughter of Charles and Jeanne Wauters, and had four brothers and a sister. Unlike many Belgians, the family remained at their home in Bruxelles throughout World War II. My father, Kenneth Taylor, had been an Officer in the 6th Battalion of Green Howards, part of the Allied Expeditionary Force which landed in Normandy in northern France on D-Day, June 6, 1944. He later took part in the liberation of Belgium and by the end of the war he was a British Army Liaison Officer attached to the 8th Belgian Fusilier Battalion. The Belgian Army had just been reformed and was reliant on supplies from the British Army.

Kenneth was based in Antwerp and met Françoise by chance at the home of Joris Minne, a well known Belgian engraver and Book Illustrator. She refused to give Kenneth her Bruxelles address, so he obtained it from a fellow student of Françoise and invited her to a concert at the Beaux Arts. She sent her mother instead, but he made the most of the opportunity to establish his credentials. Kenneth and Françoise were married in Bruxelles on October 17th, 1946 and later that year, they moved to England.

I am their eldest son, with two younger brothers, Anthony and Martin, and two younger sisters, Michèle and Annik. Throughout her new life in England, Françoise Taylor successfully combined family commitments with the discipline of being an artist. In her fifties she became Head of Art at Mount St Joseph's School in Bolton.