A cycle tour in Denmark 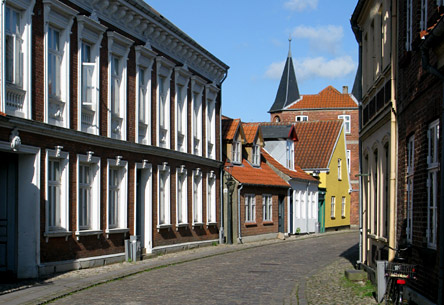 A street in Ribe, Denmark

The original plan was a short cycle tour in Denmark staying at Youth Hostels and cheap hotels, but since Sandra and I had no idea of how far we would cycle in a day we decided to go fully-loaded with camping gear, booking nothing in advance except the Harwich-Esbjerg ferry both ways. Our trip was during the last two weeks in May, a dry time of year in Denmark and outside the summer holiday season, so we didn't expect any problems finding places to stay at short notice. And so it worked out, more or less.

Our route through Denmark

Although Denmark is a small country, it can't be properly travelled on a bicycle in 11 days (let alone visit anything of interest) so we aimed at a rough semi-circle from the western port of Esbjerg, stretching over to Copenhagen in the east. Our semi-circle went anti-clockwise, hoping to average about 50 miles per day. The only things that were definite were to reach Ribe from Esbjerg on the first day, and to arrive back in Esbjerg by mid-afternoon on the eleventh day. So here's the route we finally travelled: 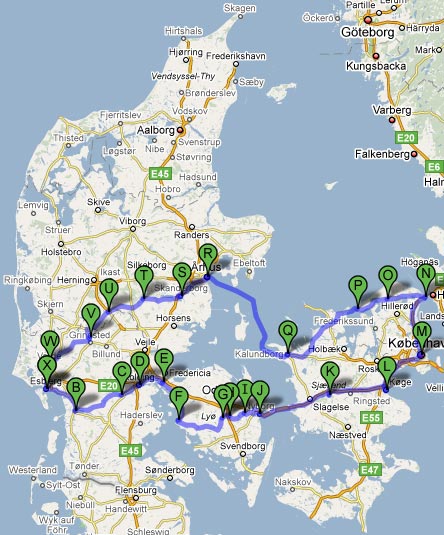 Denmark was my brother's suggestion: the best place in the world to cycle. He and Deborah toured there many years ago, on the cheap, when they were young. And it was mostly what we expected, apart from not being flat (nor cheap). Denmark has no actual mountains but in parts is quite hilly. Its defining feature, though, from a cyclist's point of view, is the segregation of bicycles from motor vehicles. In towns and villages this segregation is almost complete. Every street seems to have a cycle path alongside, with priority over vehicles at roundabouts and in some cases at traffic lights. These cycle paths also run between towns, often two-laned like a normal road, and separated from the normal road by a wide strip of grass from time to time wooded and away from the road altogether. 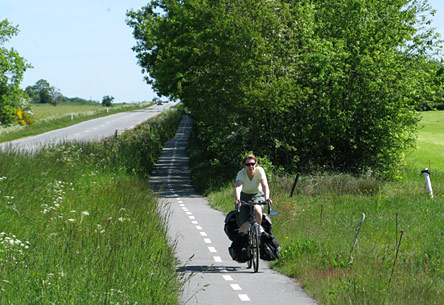 Denmark has a network of national, regional, and local cycle routes, some of which are the tarmac cycle paths alongside normal roads and others are rough tracks that go off into the country, through fields and forests, winding their way through beauty spots and places to picnic or sit beside a lake. But if you want to go from A to B then stick to the roads, and use small scale maps like the 1:100,000 cycle touring maps published by the Danish Cycling Federation. In Denmark, don't rely on signs. Their signposting is pathetic. We often wasted an hour or so trying to find the route into or out of a town, and asking people for directions wasn't any better. Incidentally, contrary to popular myth, not all Danish people speak perfect English. Some we asked didn't even know "right" and "left".

Roundabouts in Denmark are a joy. There's usually a separate cycle lane marked in blue and which has priority over other vehicles. Traffic lights are a slightly different story. The intention is there but we never really worked out how it works. To make a left turn (the equivalent of a right in the UK), instead of moving out to the centre you cycle over to the far side, then wait until it's clear. Or something. Sometimes as we waited, an elderly woman cyclist might shoot past us without stopping. Clearly, this system relies on expert knowledge and there not being too many people there at once.

The segregation of bicycles in Denmark is not universal. Many roads between towns have no cycle path other than a narrow strip of tarmac outside the white line. And the lane width on Danish roads feels narrow compared to the UK. So you're cycling very close to fast-moving traffic. A few times, up steep hills, we got off and pushed, because our bikes tended to wobble with the load we carried. But motor vehicles invariably gave us a very wide berth, often slowing down to wait. On these particular roads we felt as if we were the only cyclists on earth, as it seems that Danes are essentially urban cyclists. Only rarely did we see someone cycling between towns, even on cycle paths. 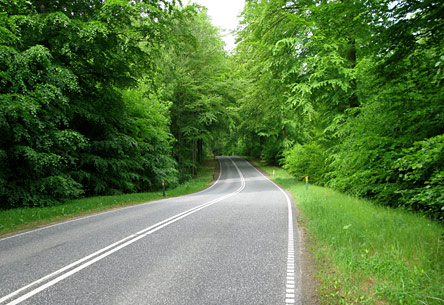 Denmark has a reputation for being windy. A following wind is fine, of course, but on a couple of days a vicious headwind made progress difficult (and unpleasant). Our cruising speed, fully-loaded on the flat, was normally 12.5 to 14 miles per hour but the 55 miles from Århus to Brande took six and a half hours.

Out of twelve nights, two were on the overnight ferry then we camped six and stayed four in Danhostels. No accommodation was booked in advance, which is probably okay in May, but we had a few strokes of luck. At Helsingør Danhostel and Århus Danhostel we got the last available room, after first being told there were probably none left because they were full with Danish school children or students. And at Nekselø Bay campsite we arrived after the office had closed for the night, but we managed to contact the owners at home nearby. This site was completely empty of people but full of caravans with awnings laid out with furniture, flowers in pots, TV sets, dog bowls with bones, and even washing on the lines, ready for an influx of 8,000 Danes at the weekend. If we hadn't got a place we'd have had to camp wild, as it was late and too far to cycle to a hotel. At least we'd bought some pasta en route.

The campsites and hostels all had excellent kitchens but the pan from our Primus EtaPower stove doesn't have a flat bottom so we mostly cooked with that - in the kitchens. When we cooked, we made pasta with a jar of Pesto sauce poured in at the end, in similar fashion to my favourite spaghetti recipe. But we ate out on six out of ten evenings (and went without anything on one). Sod the cost, we decided, and as a result, we enjoyed the best steak ever in a restaurant in Assens. 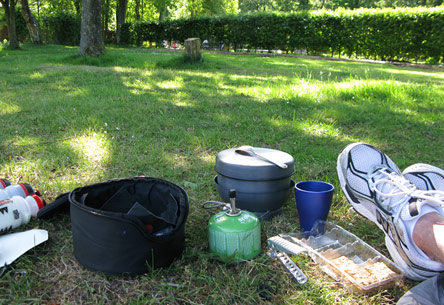 Brewing up on a campsite

We were up at seven each day, made a brew, and were on the way by nine. Incidentally, Marvel (powdered milk) is marvellous! Typically, on the road, we stopped regularly for a snack: bananas, peanuts, cake, biscuits, with orange juice or a small bottle of Tuborg lager, and we often stopped at filling stations for snack top-ups. A few times we had Danish pastries in coffee shops (I have a sweet tooth) and ate the most gorgeous omelette with salad in Køge when drying from the rain.

It's worth noting that things tend to shut down early in Denmark. The towns are dead from around 9.00pm and shops close earlier, and on Saturday afternoons as well. Also forget Sundays and public holidays, except for a few filling stations. No conspicuous comsumption here, and if you want to eat in the evening on tour you need to plan ahead.

The two of us had a very enjoyable tour. Denmark is a wonderful country in which to cycle for a couple of weeks or so. Unless you enjoy history, two weeks in one go is enough. But we'll go again next year, and probably again the year after that. It's safe, pretty, and relaxing. And the Danes are as civilised as it gets. Next time we'll seek out some of the Nature Camp Sites because we don't like caravan parks. The month of May is the time to go.

Speaking for myself, I don't care too much for sightseeing. I enjoy cycling in the landscape, passing through, on the move. But Sandra would have liked to spend more time in Copenhagen instead of the one hour it took us to cycle up from the south to Charlottenlund in the northern suburbs, and to have relaxed a little in the coastal towns in the south of Funen and the other islands (which we didn't have time to visit). A bit more planning then, on our next trip.

And now we know how far we can comfortably cycle in a day, including stops for meals, getting lost, etc. Although I've cycled almost daily for many years, I'd never ridden over about 40 miles in one go. Sandra's maximum has been 15 miles at weekends. But 60+ miles with full load over hills and dales no problem! 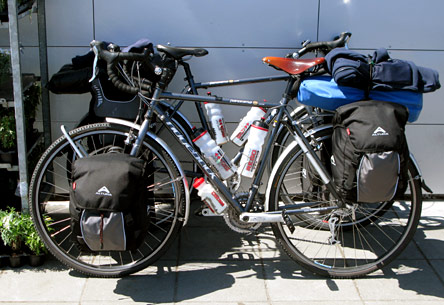 Our Ridgeback Panoramas, fully-loaded in Denmark

Some of our kit wasn't used. Nothing went wrong with the Ridgeback bicycles so the repair equipment stayed in its sack. It didn't rain much so ditto with much of the spare clothing. And the First Aid kit stayed packed. But these items still need to be taken just in case. The Kryptonite D-lock and 2-bike cover are heavy to carry, and Denmark isn't noted for crime. There are bicycles lying around all over the place. Nonetheless, at night the bikes were D-locked together and cable-locked to something fixed, or at least a couple of panniers inside the tent, then covered over with the plastic 2-bike cover. This cover was also useful as something to recline on outside the tent in the evening.

It's important to pack the panniers the same way each time, after each stop. Obvious really. But we need a map holder on the handlebars of Sandra's bike. It was a time-wasting nuisance to have to keep stopping to reach down for the maps in a pannier pocket. One other nuisance: as we cycled along I'd hear Sandra shout something, and I'd shout: "What?" Then I'd catch up (or slow down) and say: "What did you say?" If there's a lightweight easy-to-use cyclists' intercom/radio something-or-other out there on the market, we'd like one.