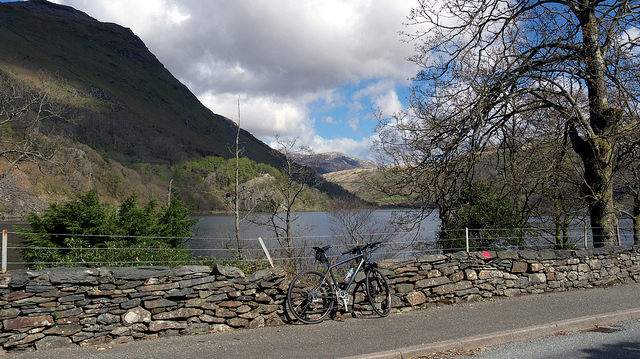 A498: Llyn Gwynant on the banks of Snowdon

Nant Gwynant, Nant Peris, Nant y Betws. I don't know if they are official names for the three valleys surrounding the Snowdon Massif in North Wales but they are written large on my OS Explorer map of Yr Wyddfa (Snowdon's Welsh name). Nant means stream, small river, or small valley. Llyn is Welsh for lake and Bryn means hill or mound. Anyway, the '3 valleys' route, as I've dubbed it, is a lovely 30+ mile bicycle ride in the gorgeous landscape of Snowdonia: Bryn Dinas, Bryn Gwynant, Llyn Gwynant, ROMAN CAMP, Pen-y-Pas, Gwastadnant, Llyn Peris, Llanberis, Bryn Bras Castle, Ceunant, Wawnfawr, Betws Garmon, Llyn Cwellyn, Rhyd-Ddu, starting and finishing at the village of Beddgelert via the A498, A4086, and A4085.

Apart from Roman Camp, those are the names of some of the places along the route, cycling anti-clockwise. Incidentally it wasn't just the Romans who were in Snowdonia. King Arthur was there too. Actually, the Romans were there but Arthur wasn't. Or the legend of the famous dog that gave Beddgelert village its name and a well-known brand of outdoor equipment. 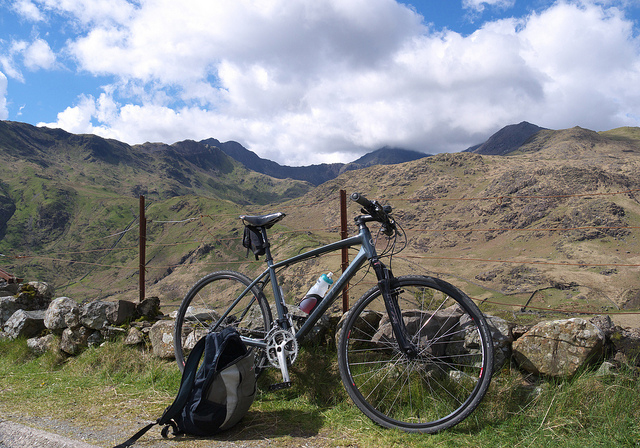 A498: the Snowdon 'horseshoe'
from below the Roman Camp

Starting from Beddgelert you cycle up to the Roman Camp along Llyn Dinas and Llyn Gwynant (lakes) then up a long steady climb with superb views of Snowdon. There is nothing left of the 'camp' but I've wondered whether ancient Romans ever walked up to the summit of Snowdon. No reason why not, as at this point you are already half way up (and they had already walked here from Rome). 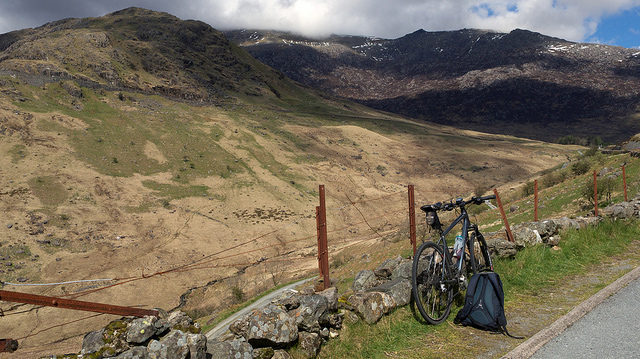 A498: Glyder Fawr and Glyder Fach

Above: the road from the Roman Camp (where the A498 joins the A4086) up to Pen-y-pass traverses the photo from right to left. From Pen-y-pass you cycle down Llanberis Pass to Llanberis and take Goodman Street leading to Ffordd Clegir, a narrow road that skirts around Cefn-du (hill) and down to Waunfawr via Ford Bryngwyn (road). Then left at the A4085 to Beddgelert. 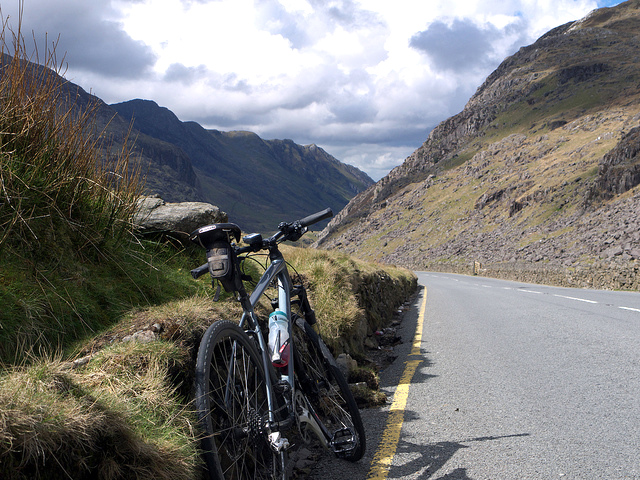 A4086: down Llanberis Pass from Pen-y-pass

The Snowdon Massif is on the left, as it always is on this anti-clockwise route. It can be cycled the other way of course, and the thrilling descent from Pen-y-pass back to Beddgelert is more fun the the descent down Llanberis Pass, but overall I prefer this way around. 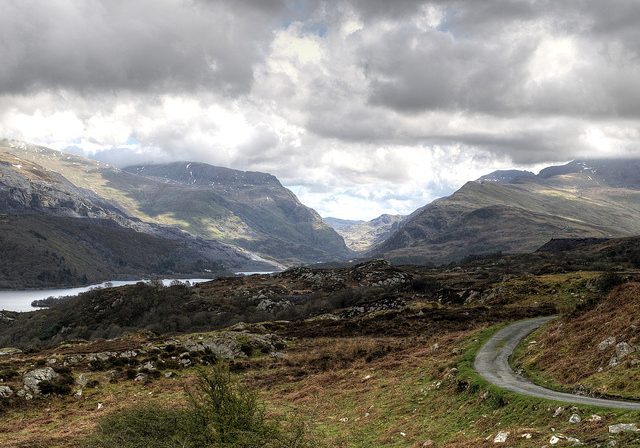 Ffordd Clegir (road): looking back at Llanberis Pass from Gallt-y-celyn

Quintessential North Wales: beautiful. A huge slate quarry still exists on the side of the mountain (left side of photo) and the Snowdon Mountain Railway is visible snaking up the mountain to the right. 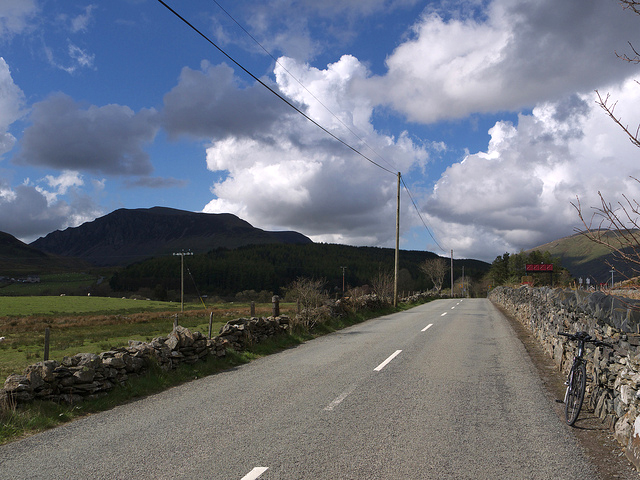 A4085: looking back towards Rhyd-Ddu village, Mynydd Mawr in shadow 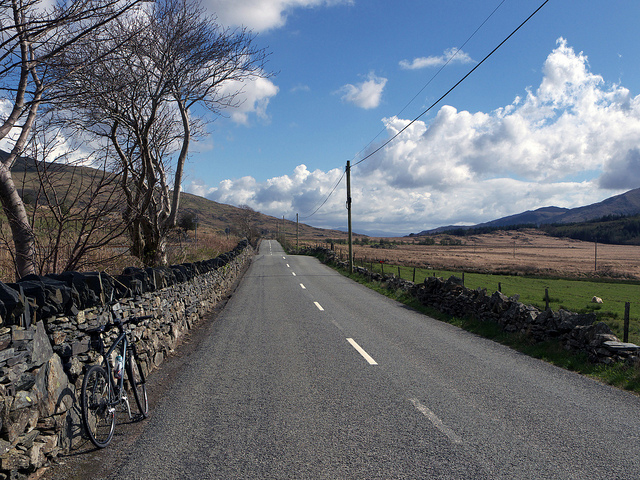 The run back to Beddgelert along the Caernarfon road completes a round trip of just 30 miles. Alongside this road is the restored narrow-gauge Welsh Highland Railway. From Beddgelert the railway goes through Aberglaslyn Pass and on to the coast at Porthmadog where it connects with the Ffestiniog Railway. 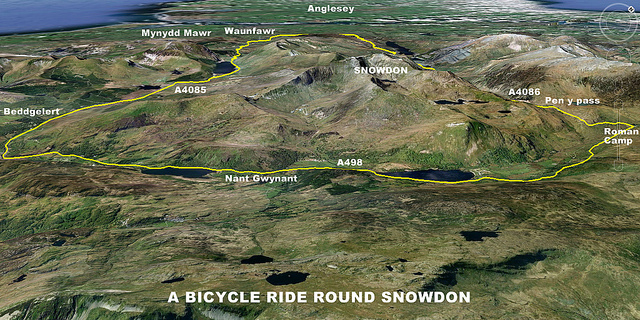 This part of Wales, and Snowdonia especially, is not really cycling country. With a few exceptions you can't lose yourself for hours in quiet country lanes like further south. Beddgelert Forest is perfect for cycling off-road for an hour or two but this is mainly a region for hill walking or climbing. Photos from Easter (2012): 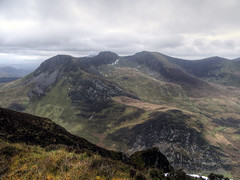 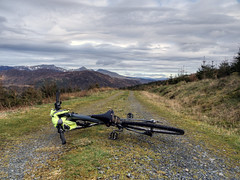