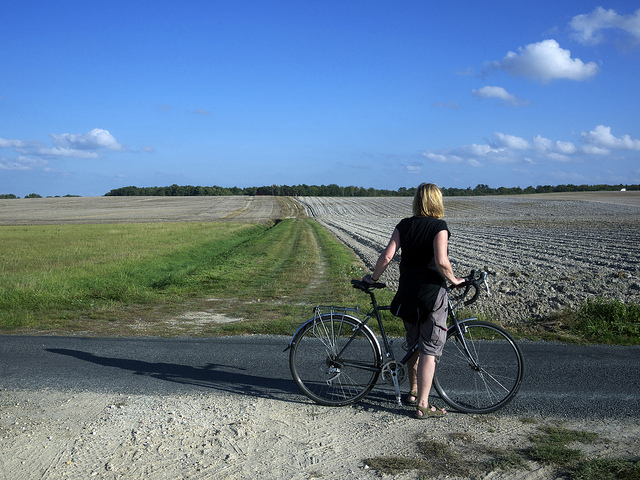 Loches is a small town in the chateau region of France. We know (or knew) it quite well from family camping holidays in the 1990s. It's not always a good idea to return to places from one's past but we did for a week this autumn with our bikes — Sandra and me, that is. We were six the last time but the other four are now grown up and do their own thing. It's almost fifty years (1962) since I cycled in France. My brother has cycled there more recently and he told us the French don't cycle much but being the nation of the world's greatest bike race they do like cyclists. He was right.

The camp site at Loches — Camping la Citadelle - was closed for the winter. We don't camp in October anyway, so we stayed at Le Logis du Bief, a town house 'gite' on a small river by the side of the park. It might as well have been summer when we arrived: blue skies and temperature around 30 degrees. Mind you, it had been 30 degrees when we'd driven through Birmingham on the way down through England. The average for Loches in October is apparently about 13 degrees.

We set off cycling to the nearby village of Montrésor on a warm Sunday afternoon and the first thing we noticed was there were no other cyclists. None. No joggers either, or horse riders, nor even any horse droppings on the road. We were cycling on a road coloured yellow on the map. The next size up is red, to be avoided on a bicycle perhaps but some red roads are empty. This yellow one was empty. The few cars that did go by gave us a very wide berth indeed. Montrésor was empty. According to Sandra's guide book the village is the prettiest in all France. Imagine Broadway in the English Cotswolds empty on a Sunday afternoon. 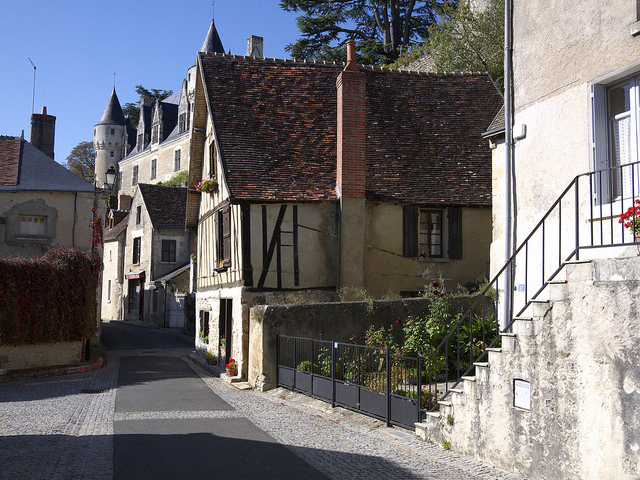 Perhaps we'd see some cyclists the next day. Our landlord thought we were mad cycling all the way to the chateau of Chenonceau and back but it's only 40 miles. "Ah, you are so sportif," he'd say, as we arrived back. Jean-Claude and Moha, his Morrocan partner, are lovely hosts and made us truly welcome in the gorgeous little gite. They also run a B&B next door but he hates the traffic that runs along the narrow street past his front door. The traffic didn't seem much of a problem to us but whether they are still there next year remains to be seen.

The road we took had been plotted by Sandra in Google Earth, her first attempt at this method of cycle route planning. Well chosen. More empty roads in rolling farmland and forests of oak. It is so quiet the only sound is acorns falling to the forest floor. Chenonceau is my favourite French chateau.

The chateau of Chenonceau in an upside down pond

The chateau, privately owned, is undergoing repairs. As you walk through the rooms with antique beds and portraits of ducs and duchesses you remember all this was once real: the parties, the hunting, and above all the decision-making when the French, Spanish, and British jostled to rule the world. "You were ze best," says Jean-Claude. I mutter something about the Royal Navy. A few days later we were at Chambord, not beautiful, just huge. 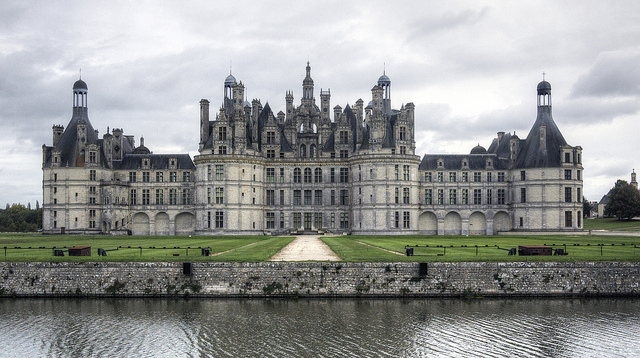 The mighty, preposterous chateau of Chambord

Chambord was too far to cycle from Loches in a single day but we'd cycled a loop south of Loches and a loop across the flats to the west. The land to the west is a sort of plateau all the way to the Loire and the chateau of Villandry, known for its magnificent gardens. We've been there before of course. 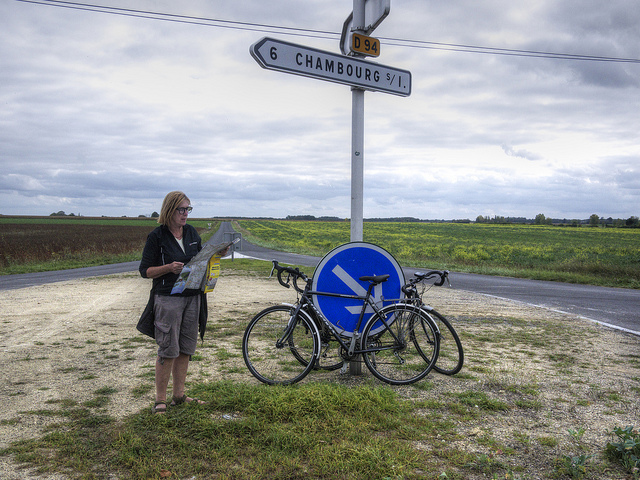 Navigating by map - more fun than a GPS 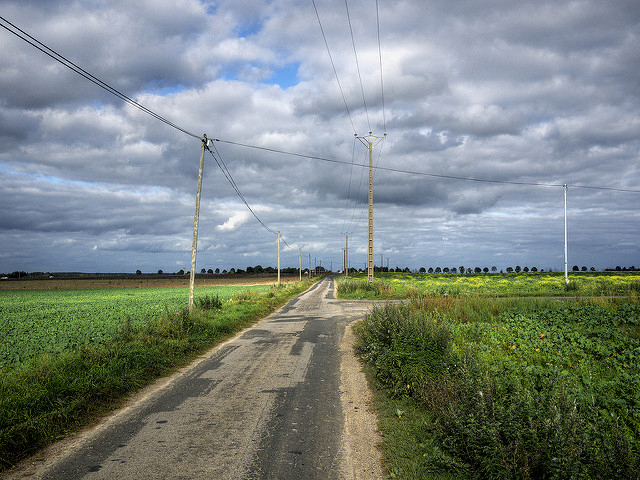 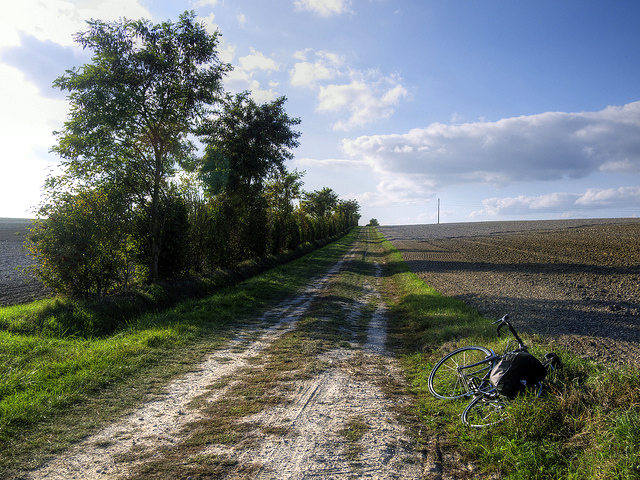 We decided that once you know these roads there is some superb cycling to look forward to. Looking at a map beforehand it's harder to judge. It depends on the traffic. Most of the roads are not in the least bit busy and you can cycle along in a very relaxed manner. Occasionally you come to a busy road but these are not neccessarily the ones shown red on the map. Signposting is mostly ok but people you ask for directions don't seem to know the way to the next town. To be fair, there is perhaps always more than one way there. Why there are so few cyclists is harder to fathom in the land of Le Tour and the bicycling onion man. It is not the behaviour of motorists - they are strangely courteous towards cyclists. 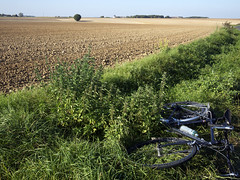 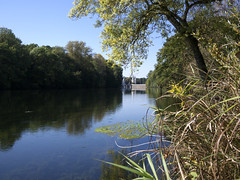 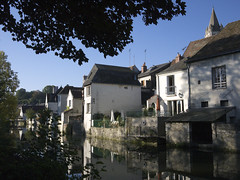 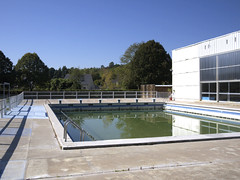 The municipal camp site of Loches that our family stayed at in the 90s is now in private ownership, surrounded by tall hedges and gated off from what used to be a lively public walkway from the town to the public swimming pool. Nowadays there are more cabins than tents and it seems the pool shut down for good in June this year, its concrete cladding crumbling to pieces. Things move on and the places of happy days are gone forever. That is why it's not always a good idea to go back. I went over there a second time but Sandra didn't want to and I know why. The ice cream shop up at the chateau has been expanded and sells nothing but tat. No silver salamanders or small French tapestries fine enough to frame.

End-of-season melancholy perhaps, but Loches is still a lovely French town. We really enjoyed our stay and plan to go again next year if Logis du Bief is still open.

If 1,000 miles of driving and 12 hours on a ship seems a bit excessive for just 120 miles of cycling, there is actually more to it than that. Besides, next time might be part of a longer trip. I had forgotten how deep France really is.