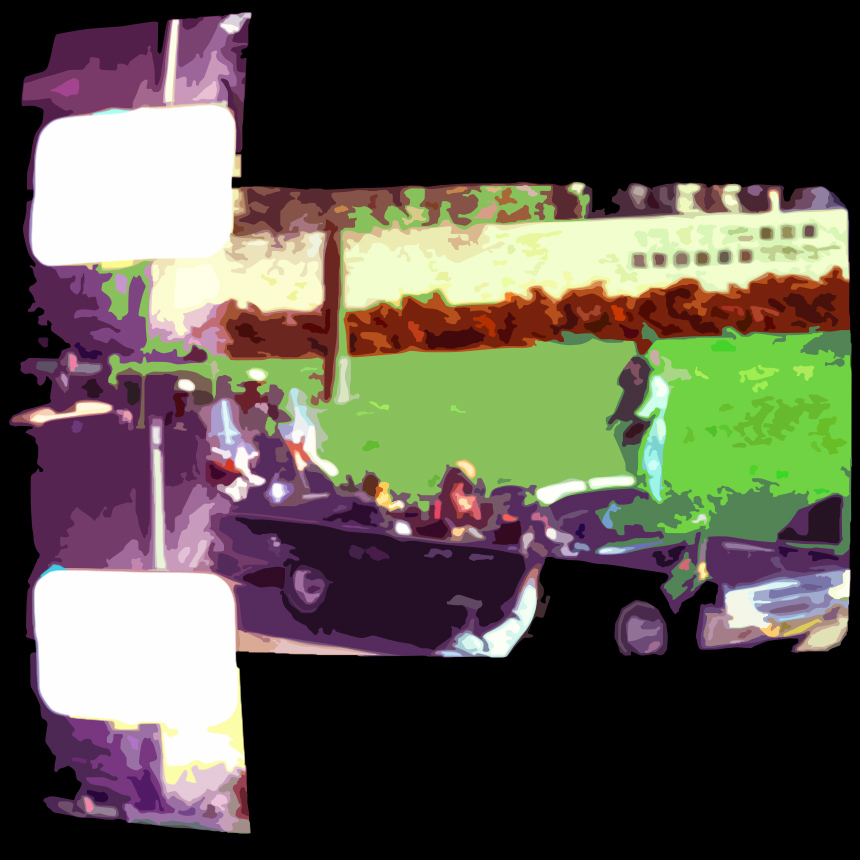 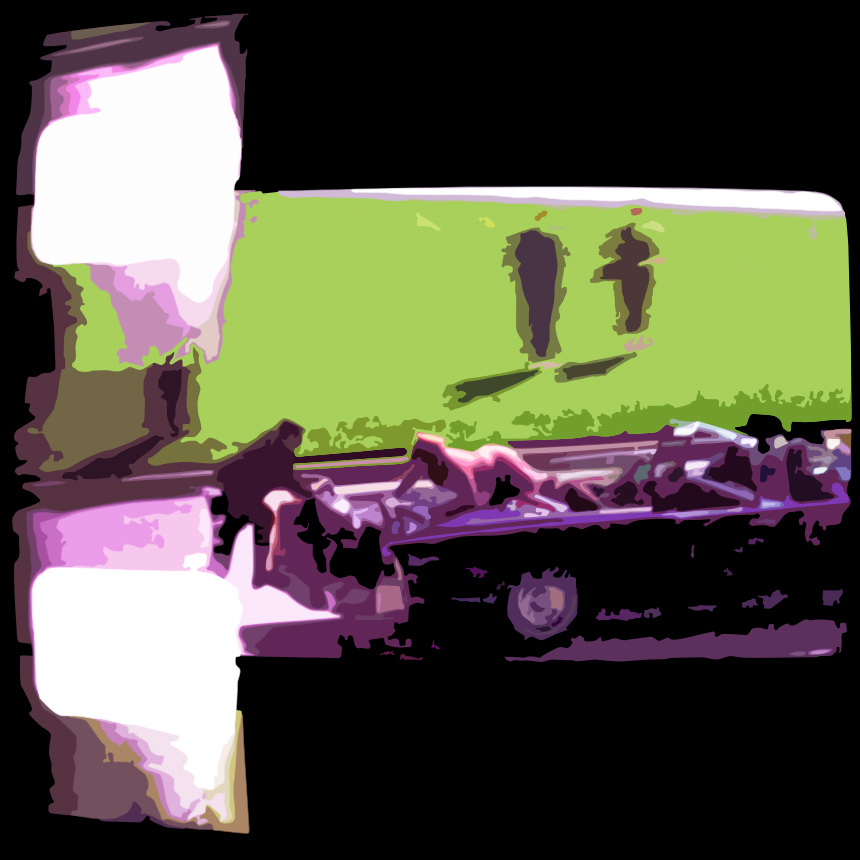 A trilogy of graphic artworks by Patrick Taylor based on frames taken from the Zapruder Film of November 22nd, 1963 recording the assassination by gunfire of President John F Kennedy in Dealey Plaza, Dallas.

The original film contains 486 frames of a silent 8mm colour motion picture sequence shot for 26.6 (now famous) seconds by Abraham Zapruder with a Bell & Howell home-movie camera. These transformative works do not add detail to the original. Instead they focus on the film's distinct colours. They are copyright. Can be printed by me at any size (300mm to 420mm square is ideal) with absolutely no loss of line definition.

The Zapruder Film is a 'home movie' of the assassination of John F Kennedy, the 35th president of the United States, on Friday 22nd of November, 1963, at 12:30 p.m. The killing took place in bright sunshine in full public view at Elm Street, Dealey Plaza, Dallas, Texas. Abraham Zapruder was a local businessman who, almost at the last minute, was persuaded by his office assistant Marilyn Sitzman to go home and fetch his Bell & Howell Zoomatic movie camera to film the Presidential motorcade as it passed through the streets of Dallas. Zapruder chose to film from a raised pedestal of the John Neely Bryan pergola on the grassy knoll north of Elm Street. Sitzman went with him as he suffered from vertigo and was apprehensive about standing there alone. 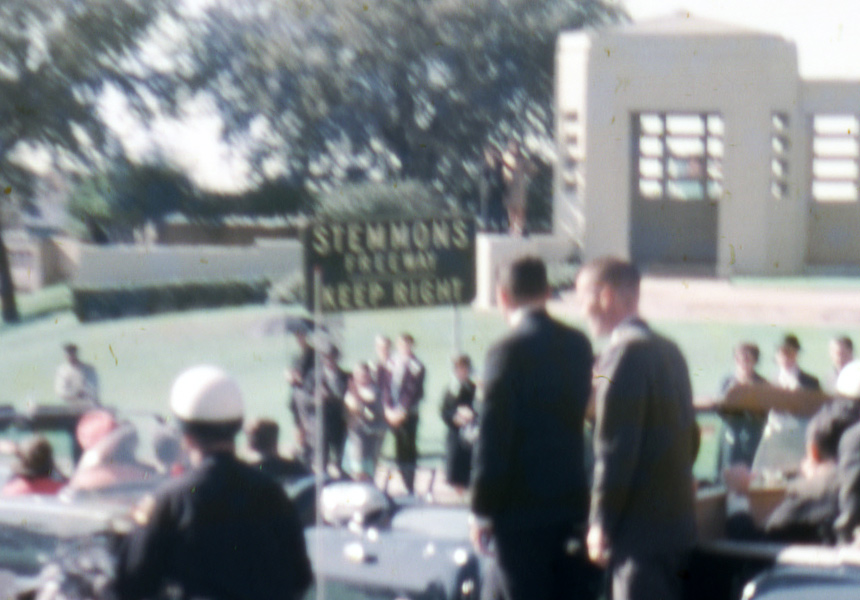 Zapruder (filming) and Marilyn Sitzman can be seen in the so-called 'Willis photo' (above) standing on the white pedestal immediately to the right of the Stemmons Freeway sign. At this point the President seems unhurt and is probably hidden from Zapruder's view, but by the time he reappears from behind the sign he has been shot through the neck. The man in the dark suit standing on the running board of the follow-up car is Secret Service agent Clint Hill who shortly afterwards can be seen running to climb on the back of the Presidential limousine with Jackie Kennedy (in pink) apparently reaching back to him as he does so. Phillip Willis's photo coincides with about Zapruder frame 202 and which he is supposedly visible in. So-called 'Umbrella Man' is visible in Willis's photo. The fatal shot to President Kennedy's head is recorded in frame 313 about six seconds later when the Presidential limousine passes right in front of Zapruder's filming position.

Another spectator, Dallas Morning News reporter Harry McCormick, had seen Zapruder filming the motorcade. As Zapruder walked back to his office, McCormick spoke to him and they agreed to meet there with Agent Forrest Sorrels of the Secret Service's Dallas office who was known to McCormick. On Zapruder's condition that the film would be used only to investigate the assassination, it was developed at Eastman Kodak's Dallas processing plant that afternoon. Three additional copies were made by the Jamieson Film Company. Zapruder kept the original plus one copy and Sorrels sent the other two to the Secret Service headquarters in Washington.

TO CUT A LONG STORY SHORT, the 'Zapruder Film' is the most investigated, and disputed, in the history of photography. Even nowadays, 'scholars' and conspiracy theorists publish articles on the web purporting this or that, or whether the whole thing has been tampered with by the CIA or 'faked' by others to conceal the truth about the assassination. This film is party responsible for only about one third of Americans apparently believing Lee Harvey Oswald acted alone (or at all) in killing their President when the sum of objective evidence, including the film itself, shows that is exactly what happened.

All the film's 486 frames can be downloaded online as .jpg files which you can 'analyse' yourself. It has obviously been 'tampered with' by the addition of a black mask around the ghost images in what is referred to as the intersprocket area of each frame but the purpose of the mask can hardly conceal anything; it has been added to form a hard outline as a reference point to stabilise the film. As one would expect, new versions of the film and stills from it have obviously been enhanced from its original graininess and jiggling movement as Zapruder panned his camera but I do not believe the fundamentals of the scene itself have been falsified. It shows Kennedy begin to reach for his throat as he emerges from behind the Stemmons Freeway sign (circa frame 226) then his wife turning towards him and seeming to encourage him spit to something out into her hand. It clearly shows his head being violently damaged in frame 313.

The presence of sprocket holes and ghost images is quite interesting in a technical sense but they add nothing that cannot be seen in the main part of each frame. The cause of the ghost images is the particular design of the inner mechanism of the Bell & Howell 8mm camera. It is to do with an aperture plate, the effect of which apparently exposes a small version of the previous frame just above the lower sprocket hole and similarly, the next frame just below the upper sprocket hole. It means the addition or removal of an original frame would be even more difficult without being detectable in the frames each side of it, especially in the mid-1960s.

The sprocket holes are visible on one side of the film only because Zapruder's 8mm film was actually 16mm wide to allow the film to be passed through the camera twice for economy, once in each direction. The film is then cut down the middle during processing to provide two strips 8mm wide, doubling the length of film available. It means the film has double the number of sprocket holes of normal 16mm film. More here (Wikipedia) » 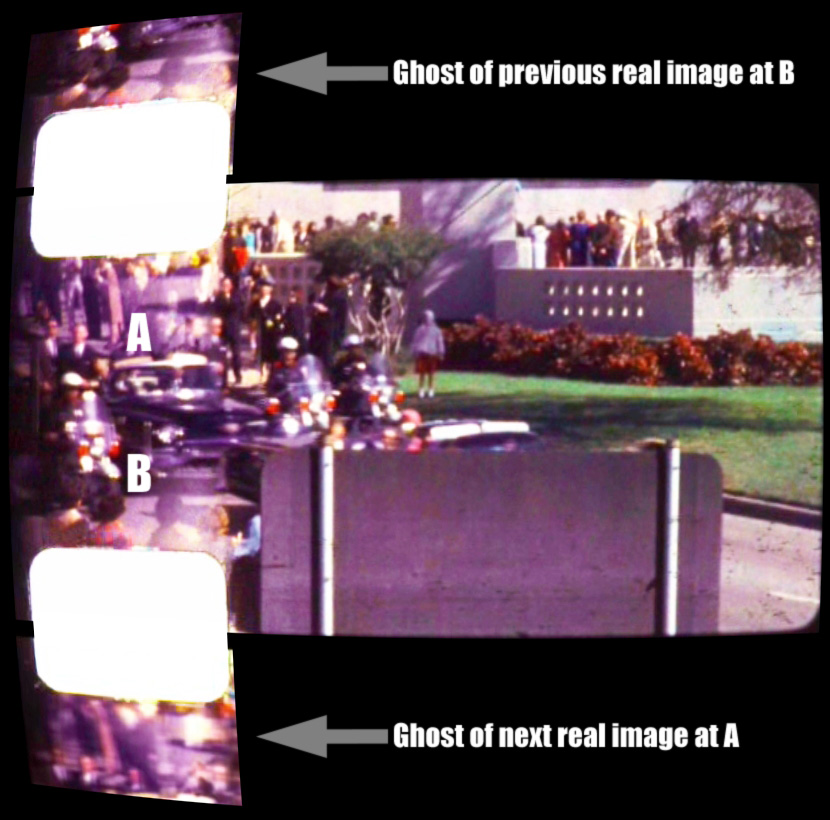 Phillip Willis can be seen in Zapruder frame 202 taking his 'Willis photo' (above). He is just to the right of 'A' with a red blob behind. The hard edge around the ghost images is assumed to have been added later to aid the stabilisation of the frames.

If you are interested (and believe what you see) you can look and decide for yourself. The film itself though is not proof of anything but part of the totality of evidence along with, for example, photographs of the three bullet cases found by Oswald's six-floor window in the Texas School Book Depository. Only two bullets were ever found but the evidence suggests three shots, the first of which missed an instant before Zapruder began filming the motorcade at frame 133. This bullet is speculated to have been deflected by the mast arm of a traffic signal light, struck a kerb further down Elm Street and grazed the cheek of James Tague, a bystander down by the Triple Underpass. Again, you can make up your own mind (Association for Crime Scene Reconstruction PDF published in May 2016). The film does not seem to show anyone turning round towards the sound of a shot from the School Book Depository at that moment except one girl running along the pavement in red and white.

The Zapruder family donated the film's theoretical copyright to the Sixth Floor Museum in the Texas School Book Depository in 1999 with one of the first-generation copies and frame enlargements once held by Life magazine. Zapruder's original is now the property of the United States government as an official "assassination record" held in the John F. Kennedy Assassination Records Collection to be permanently maintained by the National Archives and Records Administration. You can apply to see it, in principle at least.

Zapruder's film is approaching sixty years old but for all its horror it remains strangely fascinating. Why is this? Surely there are no more conspiracy theories still to be dreamed up about John Kennedy's assassination. I am guessing there are a number of reasons, some to do with scepticism in American politics in general, others to do with the film's aesthetics, its amateurism, its jerky graininess, its mixture of strong colours in the Autumn sunlight, and the seeming inevitability of the beautiful couple delivered to their public fate as if on a macabre conveyor belt from the moment they climbed in the long black limousine at a place called Love Field. It is hard to pinpoint exactly. A mixture of everything probably. No-one even seems to know for sure why Lee Harvey Oswald would do such a thing – perhaps not Oswald himself were he still alive.

Nothing of course was inevitable. There was no 'Grand Plan' on the part of Oswald. It may simply be that he could not afford to buy Marina a new washing machine so why not shoot the President? A few months previously he had apparently taken a pot-shot at retired U.S. Major General Edwin Walker and threatened the FBI with 'appropriate action' for 'bothering his wife'. There is a sense of a theatrical tragedy with the 'actors' – the Kennedy entourage, Oswald, Zapruder and even Clint Hill coming together on the Dealey Plaza stage almost accidentally and now these former strangers are linked forever.

Anyway I have been making artwork prints recently, mostly face or figure, and I wanted to do some landscapes. Looking through my files I saw that I had downloaded the full set of Zapruder's frames (some years ago, probably around the time of the 50th anniversary of Kennedy's assassination). I looked at them again and decided they are fundamentally landscapes only with something strange happening in the foreground. The colours are purple (the colour of death) and green for life. The 'something strange' is in bright colours and seems almost visceral in comparison. It is in fact. My images are a trilogy of selected Zapruder frames more or less 'as is' but expressed by separate colour fields or blobs. Viewed close in they are abstract forms resembling nothing but when the picture is viewed as a whole design it is recognisable as the scene it actually is. It is just a different way to view the Zapruder film: no graininess, just clear colours. They are pretty striking I think and I like the detached bystanders stood on the grass. They are one of the interesting features of the film, not yet quite aware of what they have just witnessed and now their names are in the history books along with the main actors.

My images files are SVG (Scalable Vector Graphics), not raster, and can be printed as big as the world's biggest printer and remain just as sharp and clear with no pixel effect at all. I have described them as 'transformative' (not derivative) on the basis of fair use. They transform the death of President Kennedy (who I remember) into something much more abstract. So it remains up to you what you make of it.

It's amazing how many people that notice the ghost imaging never figure out that it's an actual reflection of a gunman on the roof of a surrounding building. Personally I believe it to be the Dal Tex roof.

Is there any way to isolate the Ghost Image and play it? Can't find anyone who has. It's been an interest of mine for years.