At around 2.00pm (14:00) on 31st July 2021, my van broke down on a so-called Smart Motorway. A fuel injector failed without warning and the van went into 'limp mode'. My wife and I were travelling from Bolton to Snowdonia in Wales with the van loaded up for a holiday. We had just come off the M60 onto the M62 travelling south west and broke down near Barton Aerodrome just after a Smart Motorway gantry.

Limp mode in a VW Caddy Van means you can hardly move. The vehicle slows right down and splutters along at 10 mph maximum or less and there is nothing you can do about it. All you can do is find somewhere to stop before the vehicle stops by itself. Fortunately I was able to drive the van off what used to be the hard shoulder (and is now a permanent running lane) and park it on the grass verge. We got out immediately and went up the bank to phone the emergency services. 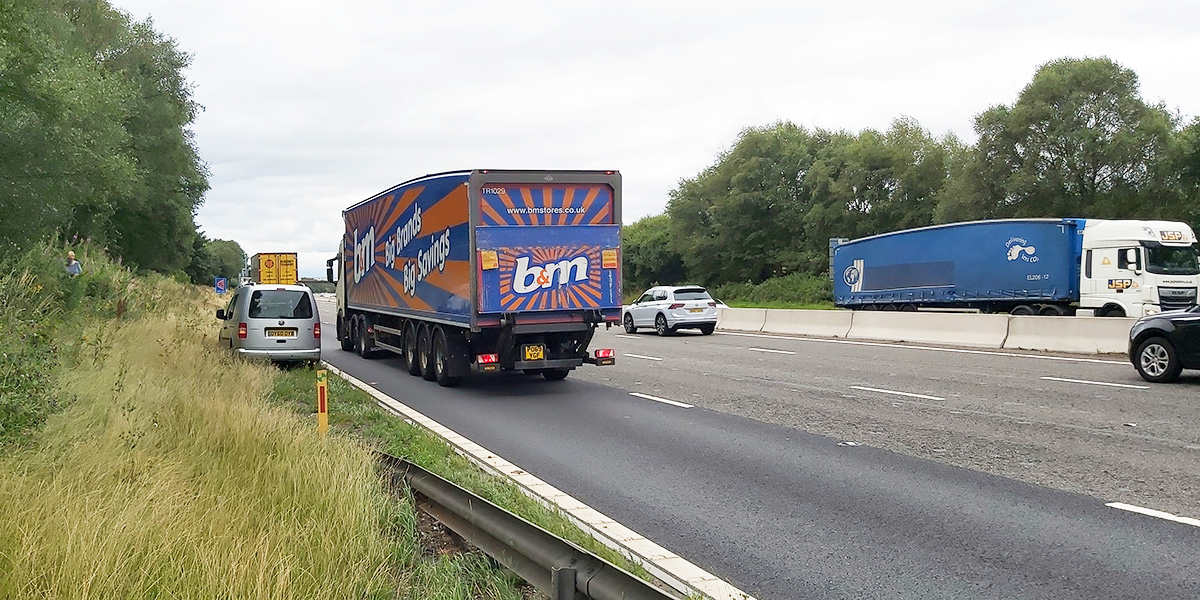 14.07: Stopped on grass verge immediately after end of 'safety barrier' 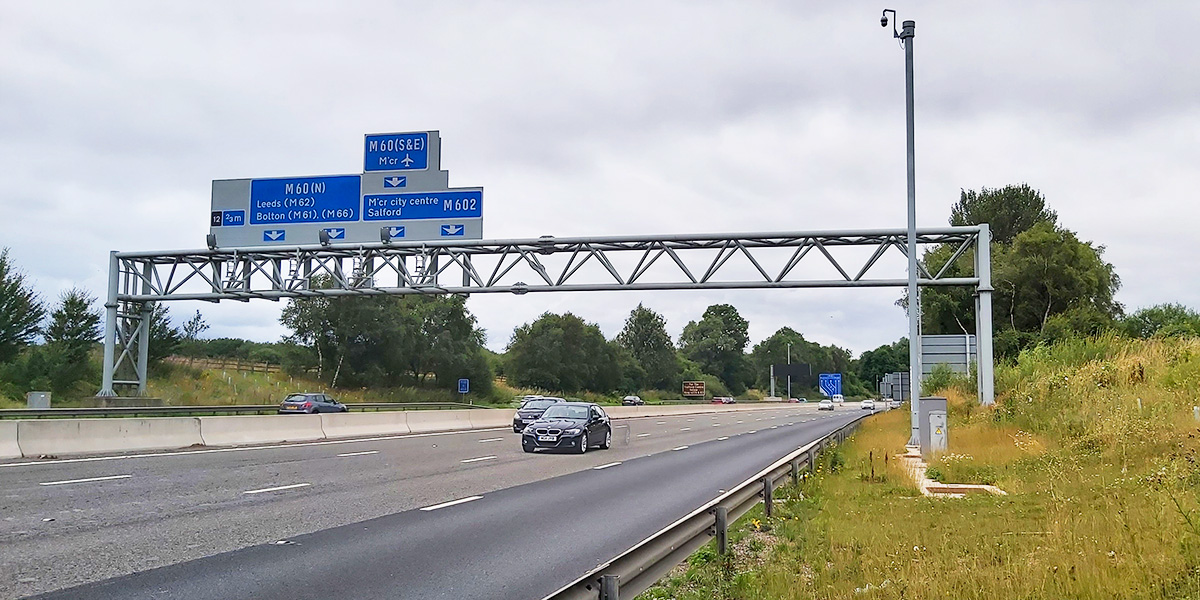 Smart Motorway gantry with 'surveillance' camera looking right at us 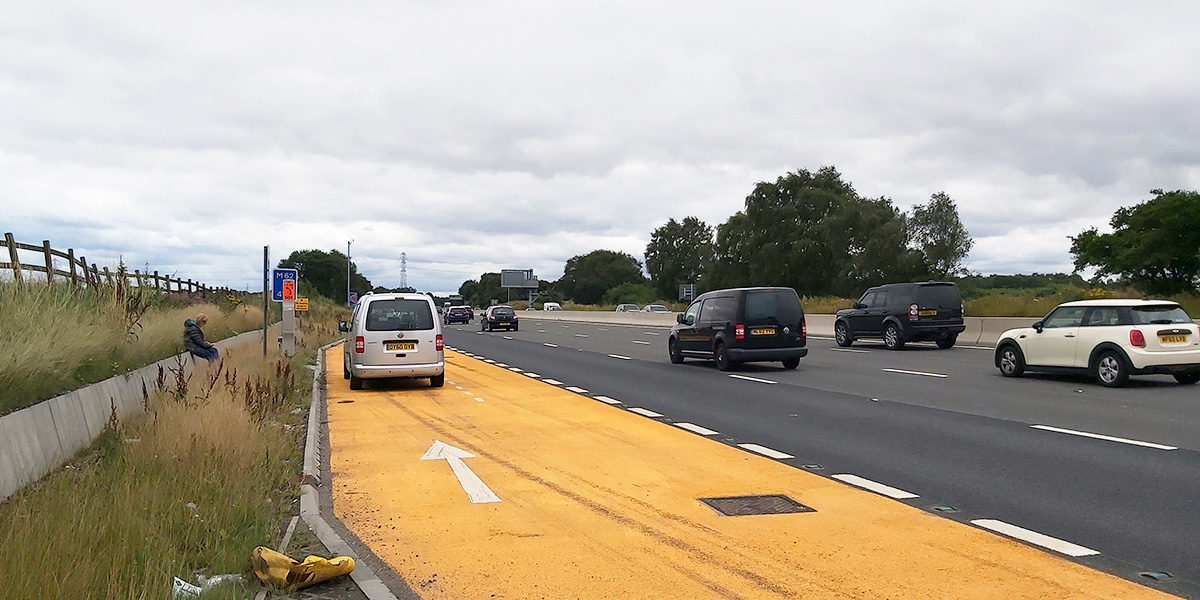 14.51: Highways England finally helped us to an Emergency Refuge Area

There was an Emergency Refuge Area about 300 yards further along the Motorway but we could not reach it safely with HGVs travelling at speed behind us in the nearside lane. Our first emergency phone call was at approximately 14.07 using a mobile phone. We were told to wait there on the grass verge. Nothing happened for over half-an-hour – nobody came. The nearside lane wasn't closed. Eventually, at about 14.45, a Highways England truck appeared, stopped, and closed the lane with cones. The driver suggested I see if the engine would start then try to reach the Emergency Refuge Area while he drove slowly behind. The engine had cooled by then and we limped along to the refuge area, parked the van and off went Highways England. It was then 14.51.

After another long wait a breakdown contractor came to carry the van to Lymm services where we would have to call the AA again. I mentioned to the driver that we had broken down right in front of a motorway surveillance camera. He said it probably wasn't on. At least half these cameras either aren't working or no-one is monitoring. That is what he said, and he should know, because his job is removing broken down vehicles off the local motorways. Anyway, those are some facts.

A few facts about Smart Motorways

Smart Motorways in the UK are not entirely the fault of Conservative governments. They go back to 2006 under a Labour government when, as it happens, the Secretary of State for Transport was Labour's Ruth Kelly, my then local MP. Since 2010 however, successive Conservative governments have continued to pursue the idea with a vengeance, at least in England and with the full support of the Highways England Company Limited and the companies that build them at a cost of billions of pounds of public money and years of travel delays all over the country. Not just money either; Smart Motorways cost lives.

The section of the M62 where my van broke down is known as All-Lane-Running. It does not have a 'Dynamic Hard Shoulder' which can be converted back into an actual hard shoulder if required. There is no longer any type of hard shoulder at all. It's a permanent four-lane motorway even when there is hardly any traffic and even when someone has broken down. If your vehicle has a serious problem you are expected to reach one of the Emergency Refuge Areas which are spaced several hundred metres apart and if you can't, hard luck. Get out of your vehicle fast before an HGV runs into it (there might be a grassy bank that you and your family can run up, or there might not be). That's it. That is a Smart Motorway.

Early in 2020 a Freedom of Information request showed that 'near misses' on Smart Motorways had increased by up to 20 times and that 38 people had died. BBC Panorama alleged that All-Lane-Running had caused multiple deaths and a possible 2000% increase in hazardous 'near misses' on the M25. The head of the Police Federation of England and Wales reportedly called Smart Motorways "a recipe for disaster" and "a death trap." Even Grant Shapps, the current Secretary of State for Transport, said last year that they are "anything but smart" and that "smart" was a misnomer and that mistakes were made in their introduction (an experiment in other words).

Naturally the Department for Transport has put out various statistics to show how Smart Motorways are safer and better and greener overall. It has reportedly said:

Official data shows that fatalities are in fact a third more likely on conventional [hard shoulder] motorways compared to All-Lane-Running Smart Motorways. The risk of a collision between two or more moving vehicles is lower. This is because ALR and DHS motorways have variable mandatory speed limits to smooth traffic flow, and electronic signs to warn drivers of incidents ahead. This means less speeding, tailgating and fewer rapid changes of speed, which gives drivers more time to react if something happens.

This may be factually true but it is not the point because they are talking about accidents involving driver error. There was no driver error in our breakdown. No matter how well-looked after a vehicle is, there is no practicable way to prevent certain breakdowns – a fuel injector failure for example. Of course nobody wants to see accidents even when they are caused by driver error but a driver who commits no error must be guaranteed complete safety on the roads of a developed nation as the UK supposedly is. There is no way even a single death should be caused entirely by the deliberate design of a road. It is completely unacceptable. But that is what Smart Motorways mean. You could be killed through no fault of your own.

Suppose a family goes on holiday in their car with a baby strapped in a child seat. They are driving through a busy motorway interchange surrounded by HGVs or some similar section of motorway where there is no grass bank, just a concrete wall. The car breaks down suddenly and unexpectedly and will move no further. They have one mobile phone with a flat battery or there is so much noise they can't hear it. The official advice then is put on the hazard warning lights, keep the seat belts on, phone 999 (if you can), then sit tight and pray that somebody in a control centre somewhere is awake and has actually seen you. Pray that you and your family come off the motorway alive.

Shapps now says improvements will be introduced to make Smart Motorways safer. Safer than what? They will not be as safe as a hard shoulder motorway until the nearside lane is closed to traffic immediately a vehicle stops in it. You'd think even a government minister would be able to see that.