THIS BRINGS TOGETHER matters already on public record concerning a residential development in Bolton in North West England now ordered be demolished and the site cleared. Matters directly relating to Bolton Council planning applications are selectively extracted from the public database on its website. I have not verified it myself. It may also have been reworded in places without intending to alter its meaning or accuracy. You can view the record yourself by clicking the application numbers below. 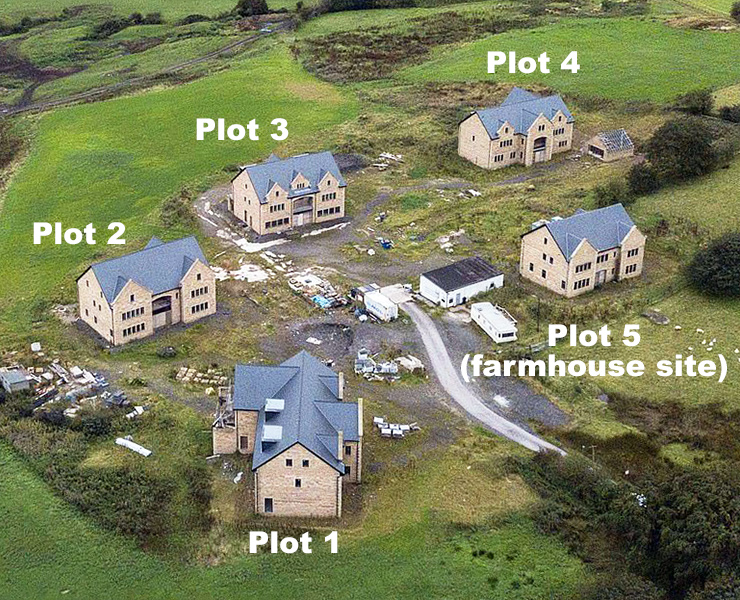 5 houses partially-built houses (due to be demolished)

Work ceased on the site in December 2016 following advice from the Local Planning Authority that the houses were not built in accordance with:

91673/14 Extension of existing farmhouse along with demolition of existing outbuildings and erection of 4 dwellings, validated 25th March 2014, approved with conditions 29th August 2014.

94832/15 Extension of existing farmhouse along with demolition of existing outbuildings and erection of 4 dwellings (amendment to previously approved application 91673/14), validated 28th August 2015, withdrawn by the applicant 5th October 2015.

A retrospective planning application for five houses under construction at Grundy Fold Farm was rejected today, but councillors say they hope a compromise can be reached to stop the homes from being flattened. The controversy over the Chorley Old Road houses began after the applicant, Sparkle Developments, built properties in a different size, design and location than was agreed with the council in 2014.

A spokesman for the developer said that the changes to the original scheme were not formally resubmitted because they had been authorised by former council planning chief Jon Berry, and added: "The applicant sincerely apologises for the application being retrospective and the intention has never been to undermine this committee." The council's planning office denied that there was any evidence of such an agreement and recommended refusal of the application.

Councillor Allen said that he wanted to commend planning officers for their "courage and conviction" in recommending refusal, adding: "It beggars belief that professional developers and builders would plough on the way they did without planning approval. It find it unbelievable. Their actions will undoubtedly have far-reaching consequences."

Enforcement notice issued on 27th June 2018 to demolish the five dwellings and a partially-built garage and to permanently remove from the land all materials, plant and equipment, all the rubble, hardcore and soil used to alter the land levels and facilitate the unauthorised development.

The Westhoughton firm behind the scheme has been accused of "arrogance" for building the houses in a way which strayed from the original plans agreed by council officers. The homeowners' spokesman said the group had not initially realised the "gravity of the situation" or expected matters to get to a point where demolition notices were served.

The nightmare scenario the homeowners find themselves in has its roots in discussions Sparkle Developments held with Bolton Council planning chiefs in 2014. The two parties came to an agreement as to how the site could be developed in an acceptable way and planning permission was granted in August of that year. But when Sparkle Developments built the homes, it did not stick to the agreed plan. The mansions were built bigger, in different places and facing in different directions to the initial scheme, before planning permission was officially applied for.

04202/18 Demolition of building at Plot 5 and incorporation of this land into wider landscape scheme, retention of partly built dwellings at Plots 1, 2, 3 and 4, erection of garages, validated 26th July 2018, withdrawn by the applicant 23rd November 2018.

Appeal dated 30th November 2018 dismissed and enforcement notice upheld 19th May 2021, varied by the deletion of 6 months from the notice and the substitution of 12 months as the period for compliance.

The integrity of Bolton's entire planning system was at stake with the Grundy Fold part-built homes inquiry, a leading councillor has said. "If such a flagrant abuse of the planning system was allowed to go though then we might as well just pack up the planning department and say to everyone 'crack on then, build what you like.' They have planning permission for five houses there. If they had built what they had permission for there would be no issues."

The owners now face the option of their 'fallback position' which is to demolish the existing buildings and rebuild in the correct areas and to the correct size. That planning permission, which is still in place, is for just four dwellings and conversion of the former farmhouse, which was demolished and stands partially rebuilt.

Additional disclaimer: I have no connection with any party involved with Grundy Fold Farm nor any interest in the development. I do not profess any particular expertise in Town Planning matters. Had I known about it I would have objected to the 2014 planning application approved by the Local Planning Authority but only because I believe it would harm the Green Belt and that is all. In addition I believe, as should all local people, in upholding the integrity and transparency of Bolton's planning system.