The brother of Marie, my Belgian 9 x great grandmother, was Libert Froidmont, a.k.a. Libertus Fromondus (or Fromundus) 1587-1653. Amongst other things, Fromondus was a professor and Doctor of Theology at Louvain University and the Dean of the church of St. Pierre. During a time when Galileo was at odds with the Catholic Church over the question of whether the Earth moves in space (or is immobile at the centre of a Godly universe), Fromondus reasoned that, if the Earth did indeed rotate as alleged by Galileo, "the wind would constantly blow from the east" and that "buildings and the ground itself would fly off with such a rapid motion that men would have to be provided with claws like cats to enable them to hold fast to the Earth's surface." 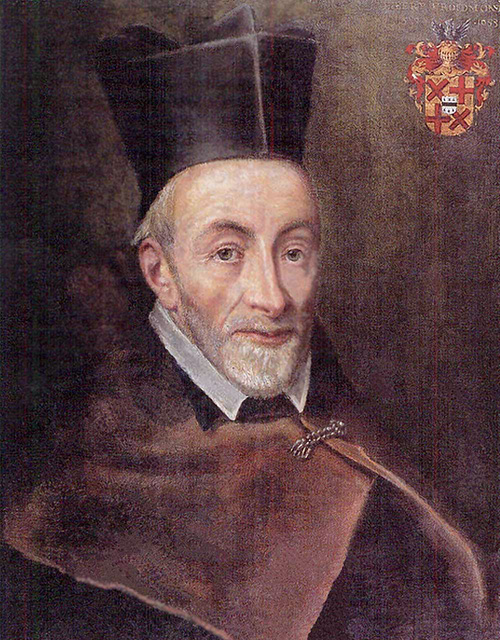 Fromondus lived in an age of superstition. A student of comets, he wrote (with another theologian named Fieni) a book which promoted the view that comets were prophetic, with a moral dimension, sent by the Almighty as warnings betokening evil. Similar teachings prevailed in the Protestant Church: "The heavens are given us not merely for our pleasure, but also as a warning of the wrath of God for the correction of our lives."

And yet Fromondus did concede that "devils, though OFTEN, are not ALWAYS or even for the most part the causes of thunder." This attempt at compromise, in the face of the new scientific view of the heavens put forward by Galileo, hints at something I sometimes wonder about: the extent to which intelligent theologians, even in our time, actually believe everything they profess in the name of their religions. Science and religion are so often in conflict that it must be hard to remain loyal to a religious stance that is so obviously at odds with the laws of physics.

In what became known as "the war upon Galileo" and Copernican theory, Fromondus, an oracle of his time, was a leading protagonist. In 1610, through his home made telescope, Galileo (inset) discovered three of Jupiter's four largest moons and observed that they seemed to be orbiting the planet. He also observed that Venus exhibited a full set of phases similar to those of the Moon, proving that it must orbit the Sun, and he was one of the first Europeans to observe sunspots whose apparent motion across the Sun's surface suggested its rotation in relation to the Earth.

The response from Fromondus was his treatise Ant-Aristarclius (written in Latin) in which he declared that the "Sacred Scripture fights against the Copernicans." To prove that the Sun revolves about the Earth he cited a passage from the Psalms which speaks of the Sun "which cometh forth as a bridegroom out of his chamber" and quoted a passage from Ecclesiastes that "the Earth standeth fast forever," proving the Earth stands still.

Apparently, Fromondus was also in correspondence with Descartes (1595-1650), the French mathematician, scientist and philosopher and a revolutionary figure whose ideas changed the relationship between philosophy and theology. Descartes is famous for his phrase "I doubt, therefore I think, therefore I am" sometimes abbreviated to "I think, therefore I am." When he heard of the condemnation of Galileo's Copernicanism by the Catholic Church in Rome and the subsequent burning of related works, Descartes abandoned publication of Le Monde, his 'Treatise on the World' endorsing the Copernican view of the moving Earth.

Fromondus and others continued to argue that Galileo's theories were not only heretical but atheistic. Learned and undoubtedly sincere, they insisted on making science conform to the Scriptures. They held up the dreadful consequences for Christian theology if the heavenly bodies were proved to revolve around the Sun and not around the Earth. "If the Earth is a planet, and only one among several, it can not be that any such great things have been done specially for it as the Christian doctrine teaches. If there are other planets, since God makes nothing in vain, they must be inhabited; but how can their inhabitants be descended from Adam? How can they trace back their origin to Noah's ark? How can they have been redeemed by the Saviour?"

In spite of Galileo and Descartes, Fromondus personified scientific education in Europe in his time. His portrait by the Flemish painter Martin de Vos disappeared from Louvain University during a fire in 1914. Another portrait apparently belongs to M. Delacroix, a former Prime Minister of Belgium, and a portrait engraving of Fromondus was made by Quirin Boel d'Anvers in 1664. According to the custom of the age, Fromondus adopted the Burthout family coat of arms.