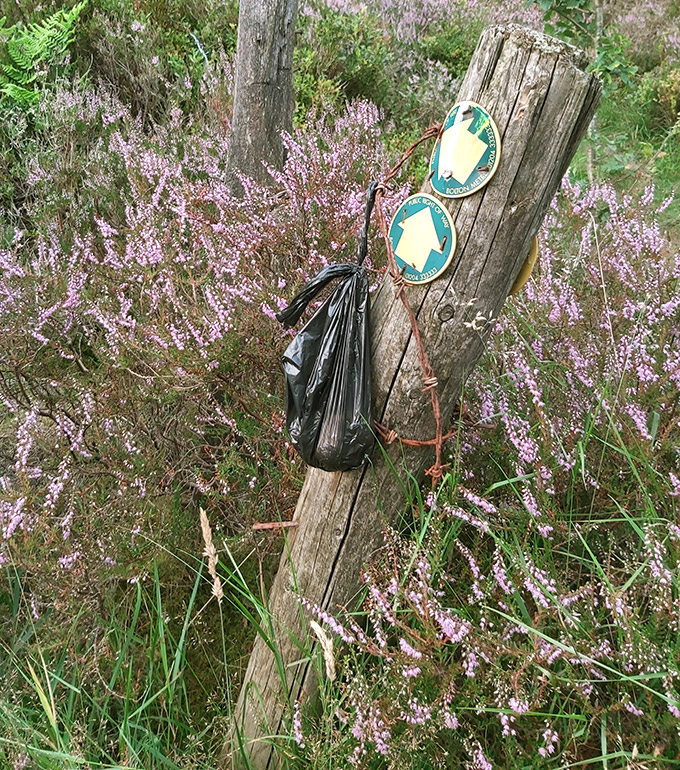 To the dog owner who did this:

If you don't want to bother picking up your dog's shit (which is at least understandable) why not just let it do it on the ground? The excrement would eventually wash away, but if it's going to be bagged, then take it away. Scooping it in a doggie bag and leaving it there is the worst of both worlds. It's disgusting and more work for everybody, including you.

It's actually hard to understand why a dog owner would do this. This one wasn't left on the path or (slightly better) at the side of the path but hung on a sign as if to say: "Look, this is my dog's shit it just did."

Obviously it's not only this one. They are everywhere in the countryside in every country where people own dogs and use doggie bags. A few years ago we were walking along the side of a river at a beauty spot in Snowdonia and the blossoms were out on the cherry trees. We came to a cherry tree with a dog-shit bag full of 'dog poo' hung on a branch. The bag was as pink as the cherry blossom. Was it an art installation or some kind of protest? Or did the person think there's a dog-shit bag collector who comes along to remove them and they're more likely to see it if the bag is pink?

Possible reasons to bag dog shit and leave it there

I can't think of any other reasons, but whatever the reason is (or combination of reasons) a proportion of anti-social (or otherwise socially-aware) dog owners are unfairly giving the responsible majority of dog owners a bad name.

This has been toned down a bit since it was first written.